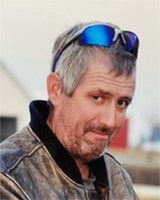 BORN
1963
DIED
2021
FUNERAL HOME
Slater-Butala Funeral Home - Genoa
132 West Main Street
Genoa, IL
John A. Boyer
Born: December 12, 1963 in Elgin, IL
Died: September 17, 2021 in Genoa, IL
John A. Boyer, 57, of Genoa, died unexpectedly on Friday, September 17, 2021, at his home.
He was born December 12, 1963, in Elgin, to Donald and Dorothy (Parrish) Boyer.
John was the owner of a construction company in Genoa, named Guns and Hoses.
He was a motorcycle enthusiast, an avid Harley-Davidson rider, enjoyed all types of music, being with people, and loved the outdoors.
He made custom bag sets, and was a perfectionist that spoke his mind.
Survivors include his son, John (Andrea) Boyer; his father, Donald Boyer; four brothers, Don, Tom, Steve, and Bob; his sister, Laura (Bob) Besler; and several nieces and nephews.
John was preceded by his mother, Dorothy Boyer.
A memorial visitation will be held for John, on Saturday, October 16 from 2:00-4:00pm at the Slater-Butala Funeral Home, 132 W. Main St., Genoa, IL 60135.
In lieu of flowers, a memorial will be set up in John's name, at a later date.
To sign the online guest book or share a special memory, go to www.butalafuneralhomes.com

Published by Daily-Chronicle from Sep. 24 to Sep. 25, 2021.
To plant trees in memory, please visit the Sympathy Store.
MEMORIAL EVENTS
Oct
16
Visitation
2:00p.m. - 4:00p.m.
Slater-Butala Funeral Home - Genoa
132 West Main Street, Genoa, IL
Funeral services provided by:
Slater-Butala Funeral Home - Genoa
MAKE A DONATION
MEMORIES & CONDOLENCES
Sponsored by Slater-Butala Funeral Home - Genoa.
3 Entries
John was an awesome man & wonderful brother in law. He had a wonderful heart and loved so many was willing to help as much as he could. John will be greatly missed and is extremely loved by so many of us.
Melisa Boyer
Family
October 13, 2021
Sorry for your loss, our thoughts and prayers are with the Boyer family
Patrick Cunningham
September 21, 2021
I met John years ago while he was visiting his parent in Mtn home arkansas then had the pleasure of seeing him again this summer while he was down visiting his dad! He made me laugh so much and showed us his corn hole boards he made and let my grandchildren play after he showed them how to play! He would call me several times since going back home from his trip down to visit him dad , I am so sad to hear about y'all's loss as well as shocked! He was planning another trip down for October for his dads 90th birthday and it saddens me we won't be making the plans to celebrate Dons birthday!
I am happy to say he brought some sunshine to my life when joking and teasing me! He will be missed! God be with you all!
Ann Anderson
September 20, 2021
Showing 1 - 3 of 3 results