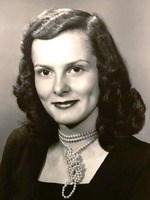 BORN
1930
DIED
2021
FUNERAL HOME
Butala Funeral Home & Crematory - Sycamore
1405 Dekalb Ave
Sycamore, IL
Madeline M. Keenan
Born: May 10, 1930 in DeKalb, Il
Died: June 11, 2021 in DeKalb, IL
Madeline M. Keenan, 91, of Sycamore died Friday, June 11, 2021 at the DeKalb County Rehab and Nursing Center.
She was born on May 10, 1930 in DeKalb to Paul and Clara (Mueller) Keenan.
Madeline worked at the Elgin Watch Company, owned Madeline's Beauty Shop in Maple Park, was a sales clerk at Henderson's Department Store and was employed at the DeKalb Ag for many years.
Although Madeline was never married and had no children of her own, she treated her nieces and nephews as her own. She will be dearly missed by her loving family.
Survivors include her sisters, Fran Brennan and Roseann Cady; sister-in-law, Fern Keenan; and numerous nieces and nephews and their families.
She was preceded in death by her parents; brother, Paul Keenan, Jr.; two brothers-in-law, Stanley Cady and William Brennan; and her nephew, Patrick Cady.
A special thanks to her friends at the DeKalb County Rehab and Nursing Center that called her Maddie, and stepped in when family couldn't, due to Covid-19.
Her services will be held at a later date.
Arrangements were completed by the Butala Funeral Home and Crematory in Sycamore. To sign the online guest book, go to www.ButalaFuneralHomes.com

To plant trees in memory, please visit our Sympathy Store.
Published by Daily-Chronicle from Jun. 14 to Jun. 15, 2021.
MEMORIAL EVENTS
No memorial events are currently scheduled.
To offer your sympathy during this difficult time, you can now have memorial trees planted in a National Forest in memory of your loved one.
Funeral services provided by:
Butala Funeral Home & Crematory - Sycamore
MAKE A DONATION
MEMORIES & CONDOLENCES
Sponsored by Butala Funeral Home & Crematory - Sycamore.
2 Entries
Our deepest sympathy to the Keenan family. We remember Madeline fondly.
Fred and Milli Cady
Friend
June 16, 2021
We have been blessed as a family to have such a wonderful role model in our aunts Tom. This name is what all of her nieces and nephews have know to call her. Aunt Tom loved tenderly, and protected our hearts fiercely. When we met a friend, Tom treated them with thoughtfulness and caring just the same. Aunt Tom made us all feel like we were the only one, yet we knew her love for all, God bless our best friend Aunte Tom.
Kevin p Cady
June 14, 2021
Showing 1 - 2 of 2 results