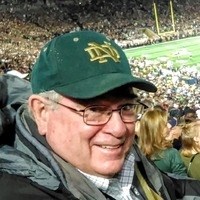 BORN
1940
DIED
2021
FUNERAL HOME
Olson Funeral and Cremation Services - Quiram Kirkland Chapel
309 South 5th Street
Kirkland, IL
Patrick Brennan
Born: December 20, 1940 in Sioux City, IA
Died: June 2, 2021 in Sycamore, IL
Patrick Joseph Brennan, 80, of Kirkland, Ill., died Wednesday, June 2, 2021. Visitation will be 3-7 pm Thursday, June 17, at Olson's Quiram Kirkland Chapel, 309 S. 5th St., Kirkland, IL 60146. Funeral Mass will be held at 9 am Friday, June 18, at St. Catherine of Genoa Church, 340 S. Stott St. in Genoa, Ill. Burial will be at Maple Cemetery in Kirkland following the funeral Mass.
Pat was born Dec. 20, 1940, in Sioux City, Iowa, to Milton and Mary (Dillon) Brennan. He moved in 1946 with his family to Sycamore, Ill., where his father operated the Brennan Cattle Co. in Kirkland, Ill., for many years. Pat graduated with the Sycamore High School, Class of '59, where he was an all-state member of the undefeated Spartan football team - one of the best in the school's history - and was inducted into the Sycamore High Hall of Fame. Pat was an Eagle Scout. He graduated in 1963 from the University of Notre Dame in Indiana with a degree in Geology. He would later earn a Master of Education Degree from Northern Illinois University in DeKalb, Ill. He was united in marriage to Carolyn F. "Katie" Brennan on July 17, 1965, at St. Mathew's Cathedral in South Bend, Ind. Pat was drafted into the Army in 1966, serving as an enlisted Combat Engineer prior to attending Officer Candidate School. He was commissioned as Quartermaster officer in 1967 and served overseas in Germany prior to transferring to the U.S. Army Reserves in 1969. A true patriot, he continued to serve his Nation until retirement from the U.S. Army Reserves as a Lieutenant Colonel in 1993.
Pat and Katie ultimately settled in Kirkland, Ill., in 1972, where the loving parents raised their three children, Jennifer, Michael, and Timothy (all graduates of Kirkland Hiawatha). He worked for many years at Brennan Cattle Company before changing careers in 1981 when he began working in the Agriculture Loan Department at the National Bank and Trust Company in Sycamore. He retired from the bank in 1999 to devotedly care for Katie, his wife of 42 years, as she battled serious health issues up until her passing in 2007. Pat loved life and continued to learn and grow. His interests and activities included extensive traveling to explore and visit family and friends all over the US and overseas. He loved his alma mater Notre Dame and attending Fighting Irish football games; he was a die-hard Chicago Cubs fan; he was a voracious reader; and late in life became an outstanding cook and baker. He became a certified Master Gardener which he pursued to help keep alive Katie's love of gardening. Through the Master Gardner program, he would meet Joan. In 2020 Pat and Joan were married after an eight-year courtship of travel, adventures, and companionship that brought Pat immense joy in his later years. They were adventurers and made many travels to visit each other's families and explore new destinations. On each journey, they would create itineraries to stop at historical locations, antique shops and anywhere in between that they found interesting. They even traveled to Ireland for a family vacation and attended a family friend's wedding. Pat's love for Joan, her love for him, and their union was a blessing that certainly added years and happiness to our father's life … for this the family is extremely thankful for Joan! For several decades up until the time of his passing Pat was highly active in the community serving as a long-time board member for Hiawatha School Board, DeKalb County Crime Stoppers, DeKalb County Master Gardeners, Franklin Township Park District, and the Kirkland Historical Society. He was a devout Catholic and was very generous in his devotion to St. Catherine's of Genoa Parish. His lifetime of public service was recognized when the Kirkland Chamber of Commerce awarded him the 2015 Kirkland Citizen of the Year.
Survivors include his wife, Joan (Vandre) Brennan; daughter, Jennifer A. Brennan of Eugene, Ore.; sons, Michael D. (Mia) Brennan of Poolesville, Md., and Timothy A. Brennan of St. Charles, Mo.; stepdaughters, Dr. Susannah (Wiliam D'Aprix) More of Sycamore and Christina (Ossian) Mogensen of Moline; stepson, Scott (Miyako) More of Tokyo, Japan; grandchildren, Cadet Oliva Brennan at West Point, and Máire, Séamus, and Ruari; and stepgrandchildren, Ava, William, and Evan D'Aprix, Juna and Leah More, and Linnea, Karl and Per Erik Mogensen; sister, Mary Ann Brennan of Cleveland Heights, Ohio; brothers, Michael W. (Adrienne) Brennan and William R. (JoAnn) Brennan, both of Santa Fe, N. M., John-Paul Brennan of Atlanta, Ga., and Thomas J. (Jane) Brennan of Viola, Wis.; grand-dog Kalby of St. Charles, Mo.; and numerous cousins, nieces and nephews.
He was predeceased by his parents, Milton and Mary Brennan; first wife, Katie Brennan; sister, Kathleen Ronan; brother-in-law, Patrick Ronan; sister-in-law, Bel (John-Paul) Brennan; and brother-in-law, Michael (Susie) Foley.
In lieu of flowers, donations can be made to the Kirkland Historical Society; please send checks to Kirkland Historical Society, 309 S. 5th St., Kirkland, IL 60146 (payable to "Kirkland Historical Society," please note on memo "Pat Brennan").
For information, 815-522-3563, or visit olsonfh.com to leave a condolence.

To plant trees in memory, please visit our Sympathy Store.
Published by Daily-Chronicle from Jun. 11 to Jun. 12, 2021.
MEMORIAL EVENTS
Jun
17
Visitation
3:00p.m. - 7:00p.m.
Olson Funeral and Cremation Services - Quiram Kirkland Chapel
309 South 5th Street, Kirkland, IL
Jun
18
Funeral Mass
9:00a.m.
St. Catherine of Genoa Church
340 S. Stott St., Genoa, IL
Funeral services provided by:
Olson Funeral and Cremation Services - Quiram Kirkland Chapel
MAKE A DONATION
MEMORIES & CONDOLENCES
Sponsored by Olson Funeral and Cremation Services - Quiram Kirkland Chapel.
4 Entries
This gentleman was one of my best friends for about 6+ years while working together as Master Gardeners. He helped me coordinate the gardening club for the children at the elementary school at which I worked. His intelligence, kindness and compassion will remain with me for the rest of my life. He taught the children for 5 years in fall and spring how to use yard tools, kitchen implements, grow flowers, prepare food, and just how being a part of a group could help people come together. He will be missed by many as he was as compassionate with his fellow neighbors and his surrounding neighborhoods. I´m glad him and Joan had so many adventures and know that my heart is breaking for all of you. Rest In Peace, Pat, I´ll see you on the flip side.
Judy Witasik
Friend
June 19, 2021
I am so sad to hear of Patrick's passing, My prayers and thoughts for your family. I will always remember Pat as a nice and thoughtful person. May God bless your family in this time of sadness.
Larry Wallace
Friend
June 19, 2021
Pat was such a great guy. He was a cherished friend and will be dearly missed. He loved his family and was so proud of each and everyone of you. We always loved looking at all his latest pictures on his little camera and later his phone. We always looked forward to his wonderful Christmas letter each year with photos. Our deepest sympathy... our thoughts and prayers are with you all.
Jerry and Nancy Brantner
Friend
June 18, 2021
Pat's father and my father were best friends, so I grew up close to the Brennan family, often going to Notre Dame football games and other events. Pat and his brothers spent their youth mowing hay and straw in those gigantic pole sheds at the yards in Kirkland. I'm sure it contributed to his football prowess. Pat was a great storyteller and entertained us all at Totman's Elevator with tales he witnessed, or most likely was part of, especially while in the Army. My sincere condolences to the Brennan family. I will remember Pat as a friend, trusted ag lender, loving caregiver, and an all around great guy.
Frank Willis
June 12, 2021
Showing 1 - 4 of 4 results