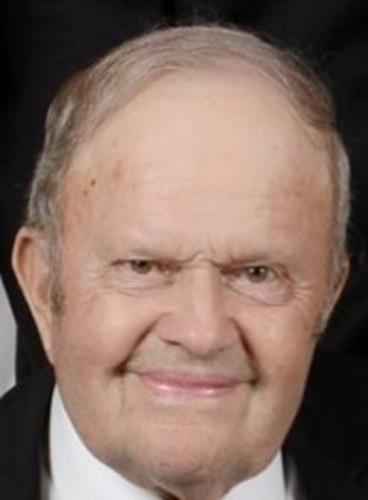 RUSSIA -- Robert J. Schaub age 85 of Russia, Ohio died on November 25, 2021, at his home in Russia. He was born on December 8, 1935 in Jackson Center, Ohio to the late William & Viola (Kinstle) Schaub. He married Lavonne "Cindy" Kissinger on November 14, 1981. She survives in Russia. He is also survived by daughter & husband Nancy & Michael Wood, Bradford, grandchildren: Jennifer & Donnie Hochadel, Michael & Christina Wood, Darren & Laura Wood, Adam Wood, great grandchildren, Megan, Natalie, Robert, Jacob, Claire, Clayton, sisters: Mary Ann & Jim Warniment, Wapakoneta, Judy & Carl Kempfer, Anna, Linda & Jack Cole, Wapakoneta, brother, Gene Schaub, Jackson Center, in-laws, Lowell & Penny Kissinger, Bradford, Eloise Kissinger, Rossburg. He was preceded in death by brother Richard "Dick" Schaub and infant brother John Schaub, in-laws, Leon Kissinger, Larry Kissinger. Bob was a member of St. Remy Catholic Church, Russia, Ohio. He was a 1954 graduate of Jackson Center High School and a veteran of the US Army and the National Guard. He was a member of the American Legion and the Catholic War Veterans, and the Sierra Club. He had worked for 42 years with CSX Railroad and was a farmer. Bob enjoyed traveling with his wife and family. He liked to visit with neighbors and friends. He loved spending time with his grandchildren and great grandchildren. Mass of Christian Burial will be held at 10:00 AM on Tuesday, November 30, 2021 at St. Remy Catholic Church, Russia with Rev. Martin Fox, celebrant. Burial with full military honors will follow at St. Remy Cemetery. Friends may call at the Hogenkamp Funeral Home, Russia from 4:00 PM to 7:00 PM on Monday, November 29, 2021 and from 9 to 10 AM on Tuesday. In Lieu of Flowers the family requests donations be R.A.C.K. Condolences may be left at hogenkampfh.com.

Published by The Daily Advocate from Nov. 29 to Nov. 30, 2021.
To plant trees in memory, please visit the Sympathy Store.
MEMORIAL EVENTS
Nov
29
Calling hours
4:00p.m. - 7:00p.m.
N. J. Hogenkamp Sons - Russia
555 South Liberty Street , Russia, OH
Nov
30
Mass of Christian Burial
10:00a.m.
St. Remy Catholic Church
Russia, OH
Funeral services provided by:
N. J. Hogenkamp Sons - Russia
MAKE A DONATION
MEMORIES & CONDOLENCES
12 Entries
I just saw Bob's Obituary. I am so sorry for your loss. I remember Bob when he was farming with your Dad and at the parish festival. I hope all the family are well during these trying times.
Mike Schaub
Friend
December 25, 2021
Bob will always be remembered for his kindness. He was a good man a wonderful story teller. I praise God that l had the blessing of knowing Bob.
Bo Rodgers
Family
December 1, 2021
My heart goes out to Cindy and family. May God's promise fill you with great comfort now and during this most difficult time.
Kathleen Monnin
November 29, 2021
Prayers to you Cindy and all of your family. Bob was a wonderful man, he will truly be missed by all. May he now rest in peace in the arms of God. Teresa Doseck
Teresa Doseck
Friend
November 29, 2021
Cindy, Very sorry for your loss, prayers and our sympathy for you and your family.
Rita and Dave Platfoot
November 29, 2021
Mike,Nancy and Family..We are so Sorry for your Loss .
Rick and Mary Moorman
November 28, 2021
Grief can be so hard, but our special memories help us cope. Remembering you and your loved one today and always.
Carl Eugene Fries, class of 1954
Friend
November 28, 2021
I was saddened to hear of your loss. I am a 1954 JaCe classmate. Please know how very sorry I am.
Barbara Stahler Kerrigan
School
November 27, 2021
Cindy, Jim and I were so sorry to hear of Bobs passing. We know he will be in heaven with Jesus. Please know we love you and will be praying for you in the days ahead.
Love
Jim and Pat Collins
Patricia Collins
Friend
November 27, 2021
We are so sorry for your loss. We will keep you in our thoughts and prayers.
The Boltin Family
Friend
November 27, 2021
Cindy, We're sorry for the loss of your husband. You & Bob were great parishioners at St. Lawrence Church for many years. Joyce & Dick
Joyce Platfoot
Friend
November 27, 2021
Dear Cindy, Nancy, Mike and family
My condolences for Bobs death I am sorry for not having the chance of meet him but i am sure he was a very good husband, dad and grandfather
Gustavo, Guilherme and Renata also send their condolences and feel sad
Love
Andrea and family
Andrea Drummond
November 27, 2021
Showing 1 - 12 of 12 results