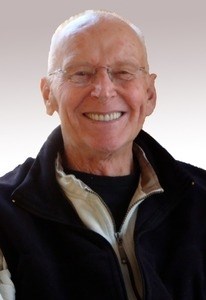 FUNERAL HOME
Carmon Community Funeral Homes
301 Country Club Road
Avon, CT
March 27, 1931 - September 2, 2021 Jack Conner Williams, 90, of Avon, CT, beloved husband of Beverly Ann (Ladiges) Williams, died peacefully with his family by his side on Thursday, September 2, 2021. Born in Pomona, CA, Jack was the son of the late Wilbur and Irene (Conner) Williams. Jack became the first in his family to attend college at Harbor Junior College followed by the University of Southern California. Jack was a member of the track and field team at Harbor and later played for USC Trojans storied football team. After graduation, Jack enlisted in the U.S. Army and served honorably during the Korean War. He began his professional career in the aerospace industry, first with Atomics International, then with Rockwell International. Jack enjoyed a long career as a senior level human resources executive and worked for several Fortune 500 companies, including United Vintners/Heublein, Inc., Otis Elevator/United Technologies, and the Barnes Group. After his retirement, Jack was a competitor in track & field events at the Senior Olympics. He also enjoyed golf and was a fierce supporter of the New England Patriots, the UConn Women's basketball team, and the football program at his alma mater, the USC Trojans. He loved travel with family, both domestic and international, including Aruba, Africa, and sailing along the Greek coast. Though he became part of the communities in Avon, CT and Hyannisport, MA, Jack always considered himself a true "Californian" at heart. Jack is survived by his loving wife of 68 years Beverly Williams; daughters, Pam Williams and her partner, Todd Kittredge of Centerville, MA; Cindy Frankey and her partner, Reciel Fielding of Chisago City, MN; Kris Acker and her husband, Jim Acker, Jr. of Harwinton, CT; and Kim Howard and her husband, Ed Howard of Charleston, SC, Avon, CT, and Hyannisport, MA; his grandchildren, Hannah, Sarah, Jack, Alex, Kyle, and Katelyn; and several nieces and nephews. In addition to his parents, Jack was predeceased by his sister, Caryl Williams. Private funeral services will be celebrated by the family at a future date. In lieu of flowers, donations in Jack's memory may be made to the Farmington Valley VNA, 8 Old Mill Lane, Simsbury, CT 06070. The Carmon Funeral Home & Family Center of Avon, CT, is entrusted with the family's arrangements. To share a memory or condolence message with Jack's family, please visit www.carmonfuneralhome.com. Carmon Funeral Home & Family Center of Avon, CT

Published by Daily Breeze on Sep. 18, 2021.
To plant trees in memory, please visit the Sympathy Store.
MEMORIAL EVENTS
To offer your sympathy during this difficult time, you can now have memorial trees planted in a National Forest in memory of your loved one.
Funeral services provided by:
Carmon Community Funeral Homes
MAKE A DONATION
MEMORIES & CONDOLENCES
Sponsored by Daily Breeze.
0 Entries
Be the first to post a memory or condolences.