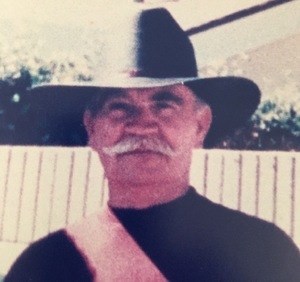 April 20, 1932 - Aug. 25, 2021 Ever the cowboy, he died in his own home with his boots on!! We say goodbye to our father, grandfather, great grandfather, father-in-law, uncle and friend. Jerry Bollinger died in his home in the early hours of August 25 of natural causes at the age of 89. He was born on April 20, 1932 in Los Angeles, the oldest of twin boys along with his brother Gary. The twins were the last of six children born to Robert E. and Gladys M. Bollinger. He and his brother were born in the same house (built in 1923) that he died in. He and his brother attended Wiseburn Elementary. When young boys, the family moved to a piece of land that today comprises the corners of Aviation and Rosecrans Blvds. They raised bush beans, corn and hogs that they took to market. In 1947, the family moved to Paso Robles, CA and had a farm on Old River Road. That summer he and his brother contracted a life threatening case of typhoid fever by drinking water from the Salinas River. They were delirious for months before finally recovering that autumn. He met his wife, Diane, the daughter of a Templeton walnut and almond rancher. They eloped to Arizona in 1954 and set up home in Lawndale. They had three children born to them, sons, Jerry Jr. and Alan and a daughter, Lianne. They moved into their Hawthorne home shortly before the birth of Lianne. He had a 41 year career at Anadite Inc. in South Gate CA. He was the lead anodizer on many government and private jobs, tackling the most difficult tasks with a "can do" attitude. 1996 was a particularly rough year for him. He lost his wife Diane in February, then five months later his twin brother, Gary in July. He retired from Anadite Inc. in 1996 following Diane's death. He spent his time and energy pursuing his passion for gardening. He turned his entire backyard into a garden, and was quick to share his bounty with his family and his neighbors. He loved raising roses as well. Another passion was old cars. Many people often kept a lookout for the Sunday cowboy tooling around town in his '57 Chevy BelAir. He was a beloved figure in his neighborhood. Many would drop by to chat as he held court in his garage, most often waxing eloquent on political issues. He is survived by his three children, Jerry (Tracy), Alan (Gina) and Lianne (David), ten grandchildren and five great grandchildren. He also leaves behind his dear friend, Mirna. Arrangements are being handled by LA Cremation. A neighborhood get together is being planned for September to remember him by.

Published by Daily Breeze on Sep. 3, 2021.
To plant trees in memory, please visit the Sympathy Store.
MEMORIAL EVENTS
To offer your sympathy during this difficult time, you can now have memorial trees planted in a National Forest in memory of your loved one.
MAKE A DONATION
MEMORIES & CONDOLENCES
Sponsored by Daily Breeze.
1 Entry
Jerry, Tracy and family. So very sorry for your loss. Please know we will be praying for you all.
Jay and Terry Wilkinson
September 3, 2021
Showing 1 - 1 of 1 results