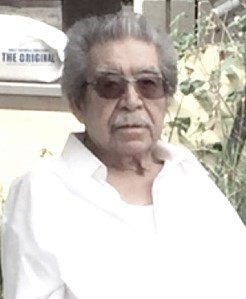 Phillip Sierra Munoz passed away peacefully, surrounded by his children at the age of 91, on Thursday August 26, 2021. Phillip (Pito) was born in Swink, Colorado on May 26, 1930. His parents, Manuel Adalpe Munoz and Melquiades Loretta Sierra Munoz together raised 13 children: Joe, Phillip, Paul, Raymond, Pauline, Johnny, Leona John Manuel, Rosemary, Anita and Steve and Esther ("O" Christina 1951). In 1950, Phillip along with his brothers Joe, Paul and best friend Louie Garnica decided to travel to California to find work and make a better life for his family. They ended up in Lomita with his Uncle Cruz. Phillip and his brothers decided to stay and work, until 1955 when they brought the family from Colorado to Lomita. During this time in 1953 Phillip met his beautiful Bride, Lucy Herrea Corral at a dance in Los Angeles. On April 16th, 1955 Phillip said "I love Lucy" and he married her and they happily raised their 5 children. Phillip worked in many occupations, painting tug boats at the docks (LA Harbor), McDonnell Douglas, painting aircrafts. While working at Cal Metal he put himself through school to become more knowledgeable in electrical and mechanic maintenance. He did this until he was hired at Northrop Grumman as a skilled Mechanic Lead Supervisor in 1977 until he retired in 1996. Phillip worked 3 jobs at a time to support his family. Aside from his skilled positions, he also managed the bar at the Knights of Columbus and bartended. Phillip loved baseball and managed several teams at Harbor City Little League Baseball. Phillip always made sure his wife and family were well provided for. Phillip was active in his community for over 60 year, with St. Margaret Mary Parish, The Knights of Columbus and Harbor City Little League. However Phillip's true love for family is the reason he started the famous Munoz Christmas Tree Lot, thereafter renamed to Munoz Sons and Daughters. Phillip worked countless hours for 25 years (1970-1996) to run the best Christmas Tree Lot in the South Bay with his sons and daughters and family. After losing Lucy, Phillip was often asked, "Do you know how to make Lucy's rice" (she made the best rice around) Phillip said, "yes I do, I watched Lucy make it". After this Phillip was asked to make his rice for family weddings, birthday party's, Easter or any occasion along with perfecting fideo (Mexican spaghetti) they both turned out to be as famous as Lucy's! Phillip touched so many hearts with his tender softspoken words, he always had a generous and giving soul and was such an honorable man. He had a love in his heart for his Family as big as this world and all that knew him would greet him with the biggest hugs! Phillip is survived by his chilldren, David (Cheryl), Diane, Raul, Yolanda and Gilbert Munoz; grandchildren, David Jr (Ashley) Munoz, Vanessa Munoz, Vincent Munoz, Courtney Munoz (Jonathan), Zachary Munoz, and Breana McCaughey-Munoz; great grandchildren, Taylor, Scarlett, Brooklyn and Alexandra Munoz (Passed 2017) and Mateo Mata Munoz and his brothers and sisters, Johnny, Leona, Valentine, Steve, Rosemary, Anita and Ester. We love you and will miss you Dad, Tata, and Grand Tata, Love forever in our Hearts

Published by Daily Breeze on Sep. 8, 2021.
To plant trees in memory, please visit the Sympathy Store.
MEMORIAL EVENTS
To offer your sympathy during this difficult time, you can now have memorial trees planted in a National Forest in memory of your loved one.
MAKE A DONATION
MEMORIES & CONDOLENCES
Sponsored by Daily Breeze.
0 Entries
Be the first to post a memory or condolences.