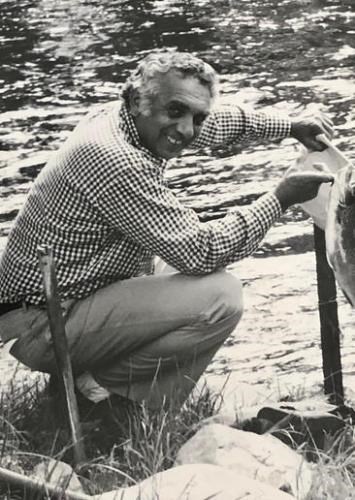 With love,
Marilyn Capra
Marilyn Capra
December 10, 2020
Herb was the very first person I met in Boulder. Back in 1979, my dad drove with me from New Jersey to help me get set up in town. I had an internship lined up but not a place to live. When we arrived, my dad said a friend of his from Denver had told him to "Go see Herbie and he'll fix you up," so we did. (I remember parking our car up the hill and walking down the street and looking at a pretty girl coming from the other direction. She looked back and gave me a big smile and said hi and I thought, "Wow, this is the place for me!") I don't remember if we had called in advance but we sat down at a booth with Herb and we all hit it off right away. My family owned a kosher deli in NJ so we were three deli guys just shooting the breeze. And Herb did "fix me up." Within a couple of hours, I had a place to live with two roommates.

I had never been west of Eastern Pennsylvania before this trip so while I was excited, I was also nervous. Meeting Herb that day was a big deal for me. He was kind and encouraging and right off the bat, I didn't feel so alone in a new town. Herb was a touchstone for me over the next several years before I came back East.

My condolences to all his friends and family.
May his memory be a blessing.
Richard Butensky
Friend
December 8, 2020
I only knew Herbie over the last 15 years and was very fond of him and Eunie. We enjoyed celebrating the holidays together and kibitzing during services. It wasn't until I read his obituaries that I learned what a mover and shaker he was on the Boulder scene during his heyday. RIP Herbie -- you deserve it.
Maryan Jaross
Friend
December 8, 2020
Thank you Herb for the opportunities. Starting in the Deli above The Tul and graduating to the Sink was quite the educational time in my life. I will cherish my experience and life lessons I learned from you. Thanks Herb, you will always be remembered for your big heart and compassion. Thank you.
Don Schneider
December 5, 2020
Dear Jimmy, Rick and GiGi,

We will miss Herb so much. We always enjoyed being with him and we have such good memories of all the times together in Boulder and in
Florida. What a great guy - always upbeat and fun. Stu loved playing
golf with him, too. We had been visiting about once a month before
the pandemic so we missed that since last January. We did speak by
phone fairly often so we will miss that, too. So sorry for your, and our,
loss.
Linda, Stuart & Lauren Kauvar
Family
December 4, 2020
So sorry for your loss. Sure had some great times at the sink. I went to school with Rick and remember the family.
Jane Hughes Burdekin
Friend
December 3, 2020
Herbie was a huge part of my University of Colorado experience. In 1966 my boyfriend drove my off a cliff 180" on the Eldora Ski Area Road. My family flew in to visit on their way east for Thanksgiving. What did they bring me? a Sink Burger! and I was in heaven.
Also my sorority had an annual Sink Breakfast, where the Pledges took the actives to the Sink for breakfast! It was a blast that we all enjoyed.
May Herb have an easy transition to his new home with the help of all the many memories that we all have of the sink! And believe me I have more.
Barbara Betcone Jolley
Friend
December 2, 2020
I lived the Sink! Our sorority had an annual sink breakfast, where pledges brought actives to the sink in their PJs!
Also on dad's day we treated our dada to the sink berger and 3.2 beer and several rounds of Hey Jude!
Barbara Betcone Jolley
Student
November 30, 2020
Thinking of you and your family, Rick and Jim. I'm grateful for those years when your Dad and Eunie were my Mom's neighbors--and for our friendship over the years. May the memories stay strong.
Teri Titchenal Ebel
Friend
November 30, 2020
a good man to work for