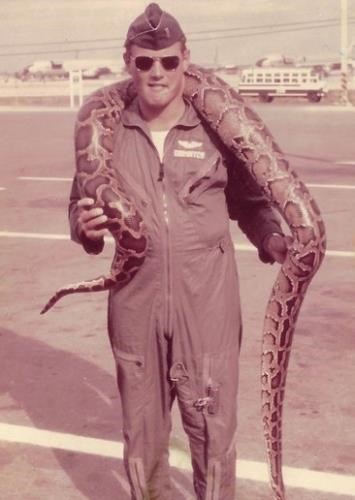 Bill Grimditch was a man who brought his classic smile and sweet demeaner with him and shared that with everyone he met. Whether it was greeting people boarding his plane, showing kindness to the cashier at McDonalds, or his unwavering loyalty to his friends and family, Bill loved people. He was a connoisseur of fast food fish sandwiches, soft-serve ice cream, Coca-Cola, flan and conservative talk radio. He had the ability to talk politics in a light-hearted manner with the staunchest of Boulder liberals and somehow remain pals. Bill was a rare soul that will be deeply missed, yet his life history shows that he lived and loved to the fullest. Bill was born in Phoenix in 1944 to Bill Jr. (deceased) and Gioia (deceased). His childhood was spent in Phoenix, Hillsboro Beach, and Lake Placid, NY. Growing up, he was a gun toting, scuba diving, waterskiing wild man that drove way too fast, and managed to get thrown out of more than one school. Bill had numerous odd jobs like picking cotton in Phoenix, cutting new ski trails in Upstate, NY, driving a taxi cab in Miami, and teaching waterskiing in the summers. He would be the first to admit that he was not a stellar student but managed to earn a degree in Psychology from the University of Miami - by the skin of his teeth. A career in Psychology was not in his cards though. With the Vietnam War looming, Bill decided to join the Air Force and soon after asked his girlfriend, Heidi, to marry him. They married in Atlanta in '68 and moved to Del Rio, TX where he began pilot training. Bill was transferred to Rapid City and was shipped overseas to fly KC-135 refueling tankers during the Vietnam War. During this busy time, Bill and Heidi managed to own and operate a hotel in Deadwood, a former brothel, and have their first daughter, Lauren. Bill and his young family (and their cats) survived the devastating Rapid City flood of '72 thanks to his bravery and quick reactions (qualities that he was renowned for). Bill described joining the Air Force as one of the best decisions he ever made as it gave him a clear vision which led to a rewarding career as an airline pilot. In '73, he accepted a pilot position at Western Airlines, later Delta, and moved his family to Boulder where he lived the rest of life. During their time in Boulder, Bill and Heidi added Brent and Lleane to the family, and five grandchildren. He served on the Boards of the Lake Eldora Race Team and the Humane Society of Boulder Valley. Bill loved Halloween and he entertained trick-or-treaters with his elaborate productions and costumes which became quite a neighborhood spectacle. He loved his family and tried to attend almost all his children's and grandchildren's events. As a grandfather, he and relished the opportunity take them to get soft-serve - even at 9 in the morning! In recent years, he worked at the Mountain's Edge Gym in Boulder where he greeted people at the front desk with that classic Bill smile and took seriously his duty to research the daily trivia stumper and gave his absolute best no matter the task. Bill was a classic gentleman in that he valued tradition and he demonstrated chivalry daily. He used words like "gal" and "mixed company" and said things like, "are you decent in there?" If he was eating at a table with "mixed company," he would stand up every time a gal would arrive or leave the table. Words to describe Bill are; loving, loyal, brave, humble, sweet, serving, honorable, humorous and driven. His family will be hosting a Celebration of Life for Bill at Mountains Edge Gym, 555 30th St. in Boulder on March 23, 2019 at 2:00PM, more info on Caring Bridge. We will all miss Bill so much but are thankful he is now free to move about the western sky, without an airplane!
To plant trees in memory, please visit our Sympathy Store.
Published by The Daily Camera on Mar. 17, 2019.
MEMORIAL EVENTS
Mar
23
Celebration of Life
2:00p.m.
Mountains Edge Gym
555 30th St., Boulder, CO
MAKE A DONATION
MEMORIES & CONDOLENCES
5 Entries
Heidi and Family,
So sorry for your loss. May your wonderful times together and your animaland human family give you comfort at this time . Sending our Love
Eleanor Nay-Chiles
March 24, 2019
Eleanor Nay-Chiles
March 24, 2019
Heidi, we played tennis together in Devils Thumb. I remember your family and extend my sympathy to all of you.
Loving obituary about a loving husband, father and grandfather.
Gerry Gibbs
March 18, 2019
I played on baseball teams with Lleane as a kid. Bill was always there and involved. He was the nicest guy. The type of guy as a kid you look up to as a role model Dad and community member. I'm so sorry to hear of his passing. It's nice to think about all the lives he touched and helped shape.
Luke Cederberg
March 18, 2019
gordon smith
March 17, 2019
Showing 1 - 5 of 5 results