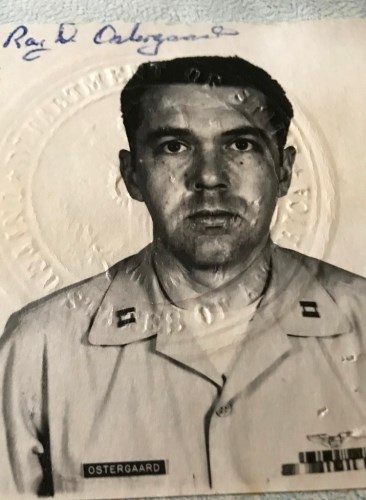 Ray Dean Ostergaard was the second child born to Danish immigrant Nelson Ostergaard and his wife, Evelyn Dunlap Ostergaard on January 19, 1940, in North Platte, NE. He went through the North Platte school system. While Dean was in North Platte High School, he was especially challenged by his math teacher, Miss Morton. He graduated in 1957 and went to work as a filling station attendant at Toom and Jim's Mobil Station. Then he applied and worked for the Union Pacific Railroad as a machinist.Dean enlisted in the Air Force in 1958. Shortly thereafter he was sent to a top secret squadron at McClellan AFB outside Sacramento where he was selected airman of the year. While there he was offered an appointment to the Air Force Academy or to the Cadet program at Harlingen, TX. Dean chose the Cadet program and graduated as a navigator. He flew for Strategic Air Command on a KC 135 re-fueller stationed at Loring AFB in Maine.Dean was married to Dona Elaine Thayer on September 15, 1963, at First Baptist Church in North Platte. They made their first home in Maine prior to being transferred to Castle AFB, CA, then to Sheppard AFB, TX. Wendy Rochelle joined the family on August 3, 1967.Dean entered pilot training while at Sheppard AFB. After pilot training, he was transferred to Travis AFB as part of the Military Airlift Command which transported troops and equipment to Vietnam.The next stop was helicopter training in Florida. This was prior to a year stent flying over Vietnam. This included evacuating the wounded.When Dean came back stateside, he was stationed at F. E. Warren AFB outside Cheyenne, WY, where he was assigned as Transportation Commander. He was then transferred to March AFB, Riverside, CA where he was on an Inspector General Team for the area west of the Mississippi River. After the Western and Eastern Inspector Teams were consolidated, Dean was transferred to Grand Forks, ND as Commander of Transportation. This involved transferring missiles around the country.Dean retired from the Air Force in 1978. He, Dona and Wendy returned to Northern California. Dean went to work for the Golden West Home Company. He then decided that he wanted to obtain a teaching credential. He got the teaching credential from CSU and started teaching computer classes at Woodland Community College.Dean was a 32nd Degree Mason. He instructed degree work at Scottish Rite Temple in Sacramento. Dean passed on January 20, 2021. He was preceded in death by his parents; an older brother, Nelson; and a sister, Karen Kay. He is survived by his wife, Dona; his daughter, Wendy and companion Patrick Beale; and two grandsons, Ross Schmitt and Jacobe Heath and wife, Becka; one brother, Terry Ostergaard and wife, Diane; two brothers-in-law, Dwain Thayer and wife, Cathy; and Earnie Thayer and wife, Carol; as well as numerous nieces and nephews.Dean will be interred at Sacramento Valley National Cemetery in Dixon.
W00151360-image-1.jpg

To plant trees in memory, please visit our Sympathy Store.
Published by Daily Democrat on Feb. 11, 2021.
MEMORIAL EVENTS
No memorial events are currently scheduled.
To offer your sympathy during this difficult time, you can now have memorial trees planted in a National Forest in memory of your loved one.
MEMORIES & CONDOLENCES
Sponsored by dailydemocrat.com.
2 Entries
rest in peace
jay ostergard
February 13, 2021
Dona and family I am so sorry for your loss. May your memories help you through this hard time. Condolences and hugs to you all.
Mary Simpson
Neighbor
February 11, 2021
Showing 1 - 2 of 2 results