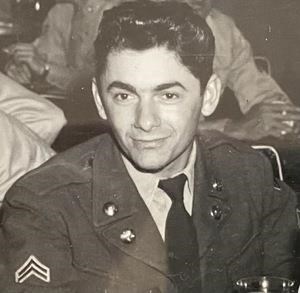 BORN
1925
DIED
2020
ABOUT
Saugerties High School
SAUGERTIES- Albert Joseph Buono died peacefully in his sleep on Nov. 19, 2020 at home and surrounded by family. Born on Oct. 31, 1925 to Frank Buono and Mary Mauro of Glasco, N.Y., he recently celebrated his 95th birthday with a small family gathering. A graduate of Saugerties High School where he played basketball, he went on to obtain a degree in Fine Arts from Pratt Institute. His study of art took him around the world including a year at the Florence Academy of Fine Arts in Italy in 1957. He remained an avid painter and artist for the rest of his life. A veteran, Albert served in the Korean theatre where he was stationed in Okinawa, Japan. He played the saxophone in the Army Band where he entertained countless GIs during his four years of service. He owned Buono’s Restaurant in Saugerties for 25 years where he ran the business from the stove, his standards too high for anyone else to cook Italian food the way he learned from his mother and his time in Italy. He closed the restaurant to spend more time with his family but worked hard for another 20 years cooking at various area restaurants in the area. He made the world a more beautiful and delicious place - his art hangs in places around the world, and many still think of him when they make pasta sauce. He is survived by his wife, Barbara Timpson Buono; four children, Stephen Bonesteel, Tamara Buono-Lund, Nicole and Jared Buono; five grandchildren, Brittany Bonesteel-Miranda, Branden Bonesteel, Malaika Kamwaki, Sita and Savitha Somnath Buono; and two great-grandchildren, Jace Bonesteel and Zoe Miranda. Predeceased are three siblings, Vincent, Frank, and Johnny Buono. He is also survived by three siblings, Bernice Palumbo, and Joseph and Michael “Buddy” Buono. Funeral services will be private due to COVID-19, but the family plans to hold a big Italian feast to celebrate his life after the pandemic. Please offer your condolences and memories for Albert and the family online at www.BuonoFuneralService.com. In lieu of flowers, the family asks for donations to Arts Mid-Hudson. Or, honor him by making a big bowl of ziti for your family tonight while listening to Pavarotti. http://www.lastingmemories.com/albert-joseph-buono
Published by the Daily Freeman from Nov. 30 to Dec. 1, 2020.
To plant trees in memory, please visit the Sympathy Store.
MEMORIAL EVENTS
To offer your sympathy during this difficult time, you can now have memorial trees planted in a National Forest in memory of your loved one.
MAKE A DONATION
MEMORIES & CONDOLENCES
Sponsored by dailyfreeman.com.
3 Entries
my deepest condolences to the family
Julia Caruso price
December 10, 2021
Mr Albert Buono was a loving and caring man I only new him for a month and one week when he first met me he didn't want to be bather with me being that I was his aide but I said I am going to win his heart over and I saw my chance one morning when I got there he was up but when I inter the room he played possum like he was sleeping and I said to him grandpa are you playing possum on me and that's when we became best buds any other nurse comes over to visit him he looks at me and I have to tell him (grandpa be nice they just want vfc to make sure you are ok . I was there until the end I did then and still do love you grandpa you will always be in my heart for ever rest High rest easy rest peacefully RIH YOU ARE MISSED LOVE Kyshia Blue
Davina Blue
Acquaintance
December 5, 2020
May God bless you and your family in this time of sorrow.
Robert K. Schlichting
Friend
November 30, 2020
Showing 1 - 3 of 3 results