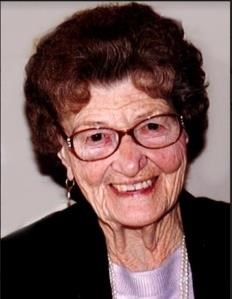 BORN
1920
DIED
2021
ABOUT
Kingston High School
FUNERAL HOME
Joseph V. Leahy Funeral Home, Inc. - Kingston
27 Smith Avenue
Kingston, NY
KINGSTON- Anna Lucy Natale Serravallo, 100, of Kingston died peacefully in the company of her children on Tuesday, Aug. 17, 2021, at Health Alliance Hospital, Broadway Campus. Born Oct. 19, 1920 on the Rose Brothers’ Brickyard in Ulster Landing, she was the daughter of the late Anthony and Giovanina (Vitale) Natale. She was Anna, Annie, Mommy, Aunt Annie, Gram, and GG to all who loved her. As a young girl, Anna helped her father and brothers hack bricks before attending the Emma Wygant School and Kingston High School. A skilled seamstress most of her life, she worked for various shirt, blouse and dress factories in Kingston, and marched up Broadway to help bring in the union in the late 1930s. She was also employed as a cook at the Number 6 School for the Kingston School District and IBM as well as being a receptionist for IBM, retiring in 1987 – a work life from bricks and bobbins to bytes. She married Santo V. (Flash) Serravallo of Glasco on Jan. 30, 1944 at St. Coleman Church in East Kingston. They celebrated 59 years of marriage prior to his death in 2003. They thoroughly enjoyed bus trips to casinos in Atlantic City and Connecticut and both cut a mean rug on the dance floor. Anna was a member of the VFW Post 1386 Auxiliary. She celebrated her 100th birthday with an immediate family gathering and received several honorary certificates from the city of Kingston and Ulster County and a proclamation from the NYS Assembly, along with a commemorative plaque from the VFW. She loved the numerous trips she took to New York City to see Broadway plays, and attended as many of our local Coach House and Kiwanis productions as possible, right up in the front row. She never missed a NY Yankees game, even bringing her little transistor radio into the diner believing others wanted to hear the game, too, and always staying on for the post-game interviews with the past three managers. She always came home from the casinos with more money than the rest of us and completed the Freeman’s daily anagram in a snap. She was an excellent cook and prepared many meals, whether for holidays or just regular mealtimes for family and extended family members, and kept the kitchen door open for friends and neighbors to share.. She especially enjoyed cheering for her grandsons’ sports games and concerts and teaching her great-grandchildren songs and rhyming games. Surviving is her daughter, Teresa (Terri) Dwyer and her husband John; her son, Vincent Serravallo,; her grandchildren, John Dwyer, Jr. and his wife Katy, Denis Dwyer and his wife Val; and her great-grandchildren, Molly, Annabelle, Andrew, and Maggie Dwyer. Many nieces and nephews and second generation nieces and nephews also survive. Her siblings Catherine Gallo, Louise Moran, Julia Lucci, Louis Natale, Paul Natale and Jim Natalie all died previously. Funeral arrangements are under the guidance of the Joseph V. Leahy Funeral Home, Inc. 27 Smith Avenue, Kingston. www.jvleahyfh.com. Friends will be received at the funeral home on Sunday, Aug. 22, 2021, from 4 to 7 p.m. The funeral procession will form 10 a.n. at the funeral home on Monday, Aug. 23, 2021. A Mass of Christian Burial will be celebrated 11 a.m. at St. Joseph’s Church, Wall St., Kingston. Burial will follow in St. Mary’s Cemetery. For the safety of all concerned, masks are required at the funeral home and church. Expressions of sympathy may be made in the form of contributions in Anna’s name to a charity of your choice. https://www.lastingmemories.com/anna-lucy-natale-serravallo
Published by the Daily Freeman from Aug. 20 to Aug. 23, 2021.
To plant trees in memory, please visit the Sympathy Store.
MEMORIAL EVENTS
Aug
22
Visitation
4:00p.m. - 7:00p.m.
Joseph V. Leahy Funeral Home, Inc. - Kingston
27 Smith Avenue, Kingston, NY
Aug
23
Funeral
10:00a.m.
Joseph V. Leahy Funeral Home, Inc. - Kingston
27 Smith Avenue, Kingston, NY
Aug
23
Mass of Christian Burial
11:00a.m.
St. Joseph’s Church
Wall St, Kingston, NY
Funeral services provided by:
Joseph V. Leahy Funeral Home, Inc. - Kingston
MAKE A DONATION
Please consider a donation as requested by the family.
MEMORIES & CONDOLENCES
Sponsored by dailyfreeman.com.
0 Entries
Be the first to post a memory or condolences.