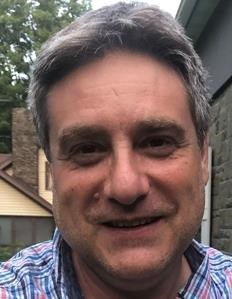 ABOUT
Onteora Central High School
FUNERAL HOME
Lasher Funeral Home Inc
100 Tinker St
Woodstock, NY
WOODSTOCK-Christopher Aaron Fisher, a family man and electronics wizard who spearheaded the development of innovative tech products in the Hudson Valley, entered eternal rest on May 20, 2020 while surrounded by loved ones in his hometown of Woodstock. He was 52. Chris poured his heart and soul into his wife, daughters, family and Markertek, a broadcast and recording supply company in Saugerties, where he ascended to vice president of engineering. Chris inspired high-quality workmanship in the employees that he managed. Under his guidance, Markertek's fiber-optic team grew from three employees to more than 15, and won important awards and certifications in the broadcast video industry from Neutrik (Lichtenstein), LEMO (Switzerland) and Canare (Japan). Chris took pride in the awards because they generated positive exposure for the region’s emerging technology sector. Chris graduated from the State University of New York at Binghamton with a degree in electrical engineering. He worked tirelessly at Markertek for 22 years. Prior to that, Chris worked as an electronic technician at IBM and as a ground systems engineer at the Geophysical & Environmental Research Corporation of Millbrook. Born in Kingston, Chris grew up on Edgewood Lane in Woodstock. A spiral staircase led to Chris’ bedroom, where he taught himself how to fix electronic equipment. Starting at a very young age, he would experiment with circuits, resistors, motherboards - all sorts of geeky stuff that he kept near his bed. Chris had an endless curiosity. He was always eager to describe his latest project, the last thing he had explored. It was often something that he could directly demonstrate. Chris displayed athletic and theatrical talents, too. His lifelong friends fondly recalled him playing the role of Charlie Brown in a fifth-grade performance at Woodstock Elementary School, and winning the Woodstock Little League title during the 1970s with the Mets. They affectionately renamed him “Fish,” a nickname that stuck for the rest of his life. Chris was a longtime member of the Woodstock Golf Club and loved to play the course there. At Onteora High School, Chris played on the football, basketball and golf teams, and met Lisa Jaeck, his wife-to-be. Chris married Lisa, also a member of the Class of ’86, in 1999. They moved to Saugerties and had two loving daughters, Annika and Brynn Fisher. Chris left a legacy of dedication. He cared deeply for his family and the betterment of Markertek employees and products. He treasured Woodstock, which he credited for his lifelong love of ... peace, love, and music. In the words of his daughter Annika, Fish’s spirit lives on in a round of golf on a late afternoon, a carefully selected collection of rocks placed on a side table, a foot pounding to the beat of a song, and the smells of freshly cut grass, hazelnut coffee and the salty ocean air. Chris is survived by his wife, Lisa Jaeck-Fisher, and daughters, Annika and Brynn Fisher, all of Saugerties; mother, Lorraine Munson of Woodstock; brother, Robert J. Fisher Jr., sister-in-law, Jillian Fisher, and nieces, Abigail and Annabelle Fisher, all of Woodstock; brother, Erik Fisher of Saugerties; sister, Gabrielle Munson, and nephew, Elijah Robair, both of Woodstock; and step-siblings, Brett Munson of Woodstock, Valerie Friedman of Florida, and Victoria Steadman of Arizona. Chris was predeceased by his father, Robert J. Fisher Sr., and stepfather, Stuart Munson. A golf tournament will be held in honor and celebration of Chris’ life at a date to be announced. Arrangements are under the guidance of Lasher Funeral Home Inc. 100 Tinker Street Woodstock, N.Y. Condolences, Tributes and Photos may be left for the Fisher Family by visiting www.lasherfh.com http://www.lastingmemories.com/christopher-aaron-fisher
Published by the Daily Freeman from May 30 to May 31, 2020.
To plant trees in memory, please visit the Sympathy Store.
MEMORIAL EVENTS
To offer your sympathy during this difficult time, you can now have memorial trees planted in a National Forest in memory of your loved one.
Funeral services provided by:
Lasher Funeral Home Inc
MAKE A DONATION
MEMORIES & CONDOLENCES
Sponsored by dailyfreeman.com.
1 Entry
To Lorraine and her family and the loved ones of Christopher. Im so sorry for your loss. My thoughts take me back many years with this family. I will keep them all in my thoughts and prayers.
......Sank
John Senkowicz
Friend
June 6, 2020
Showing 1 - 1 of 1 results