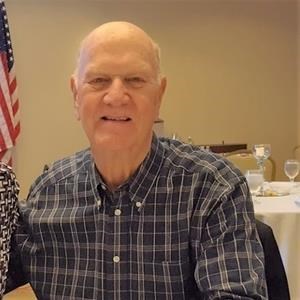 BORN
1936
DIED
2021
ABOUT
Kingston High School
Francis E. “Butch” Whalen, 85, formerly of Town of Ulster, New York passed awayFriday, October 15, 2021 after a valiant battle with Alzheimer’s Disease with his family by his side. Butch was a loving husband, devoted father and grandfather and will be missed every day. Born on April 25, 1936, the son of Richard H. and Mary (Urell) Whalen in Kingston, Butch was a 1956 graduate of Kingston High School. He honorably served in the US Navy as an electrician on the destroyer, U.S.S. Willard Keith. After returning from service, Butch proudly owned and operated Butch’s Mobil Station on the Boulevard before entering management at IBM Kingston until his retirement in 1997 after 32 years. An avid outdoorsman, Butch enjoyed hunting and fishing in the Catskills and never turned down a chance to jump in his truck and “run the roads.” He was a member of the Ruby Rod and Gun Club. What brought Butch the most joy was having a catch or hitting some grounders. He was a passionate and longtime supporter of sports in Kingston, cheering on generations of players in softball, volleyball, basketball, football and baseball at the N.Y. School for the Deaf, Town of Ulster, Kingston High School and Ulster Community College and the University of North Carolina at Greensboro. Butch is preceded in death by his wife of 52 years, Mary Ann E. (Gormley) Whalen of Kingston. They were married May 11, 1963 at St. Joseph’s Church in Kingston. He is survived by his loving daughters Laurie Whalen, of Kingston, NY and Cheryl Whalen of Greensboro, NC and his cherished grandchildren, Thomas King and Amanda King of Greensboro, NC, and Jason King of Kingston. He will be missed by his maltese, “ Baby, baby, baby,” Mia. He also leaves behind one sister, Betty Jane Kozlowski of Kingston, NY and one brother, Louis M. Whalen of Summerville, SC, and several nieces and nephews. He was predeceased by his parents, Richard and Mary Whalen and several siblings.Butch will be reunited with his beautiful bride at a private family graveside ceremony at Whitfield Cemetery in Accord. The family asks that in lieu of flowers, donations be made to the Alzheimer's Association to help make “A world without Alzheimer's and all other dementia®” ... https://act.alz.orgArrangements entrusted to Triad Cremation and Funeral Service of Greensboro, NC. https://www.lastingmemories.com/francis-e-whalen
Published by the Daily Freeman from Oct. 22 to Oct. 24, 2021.
To plant trees in memory, please visit the Sympathy Store.
MEMORIAL EVENTS
To offer your sympathy during this difficult time, you can now have memorial trees planted in a National Forest in memory of your loved one.
MAKE A DONATION
Please consider a donation as requested by the family.
MEMORIES & CONDOLENCES
Sponsored by dailyfreeman.com.
0 Entries
Be the first to post a memory or condolences.