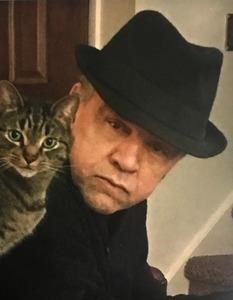 ABOUT
Saugerties High School
FUNERAL HOME
Seamon-Wilsey Funeral Home, Inc.
45 John Street
Saugerties, NY
HIGHLAND- Gregory J. Armstrong, 57, of Sterling Place, died Thursday, May 27, 2021, at Vassar Brother’s Medical Center surrounded by his family. Born Nov. 8, 1963, in Mt. Vernon, N.Y., he was the son of Jack Armstrong and the late Patricia McGuire Armstrong. A graduate of Saugerties High School and Emerson College in Boston, he began his journalism career at WKNY radio station before serving as a producer at CBS Radio News and its World News Roundup edition for 25 years. In 2000, he was part of the team that received the Edward R. Murrow award for achievement in broadcast journalism. He was a member of the Writers Guild of America East, a diehard Yankees fan, an avid golfer, and a champion of the sport of boxing. He recently co-authored the biography of Larry Holmes (with the Easton Assassin himself), titled “Don’t Tell Me I Can’t”. He is survived by his father, Jack; wife, Lisa; daughter, Olivia (Kevin Fox) Armstrong of Brooklyn; son, Jake (Sara Immich) Armstrong of Averill Park; and two goddaughters: Ashley Paquin and Kaylee Williams. Friends and family will be received at the Seamon-Wilsey Funeral Home, Inc., corner of John and Lafayette Sts., Saugerties, on Sunday, May 30, 2021, at 2 to 3:45 p.m. His Service of Remembrance will be held at 3:45 p.m. Family suggests donations in his memory be made to the ASPCA, World Wildlife Fund or the Juvenile Diabetes Research Foundation. Expressions of condolences may be shared with the family on Greg’s Tribute Wall at www.SeamonWilseyFuneralHome.com https://www.lastingmemories.com/gregory-j-armstrong
Published by the Daily Freeman from May 28 to May 30, 2021.
To plant trees in memory, please visit the Sympathy Store.
MEMORIAL EVENTS
May
30
Visitation
2:00p.m. - 3:45p.m.
Seamon-Wilsey Funeral Home, Inc.
45 John Street, Saugerties, NY
May
30
Funeral service
3:45p.m.
Seamon-Wilsey Funeral Home, Inc.
45 John Street, Saugerties, NY
Funeral services provided by:
Seamon-Wilsey Funeral Home, Inc.
MAKE A DONATION
MEMORIES & CONDOLENCES
Sponsored by dailyfreeman.com.
0 Entries
Be the first to post a memory or condolences.