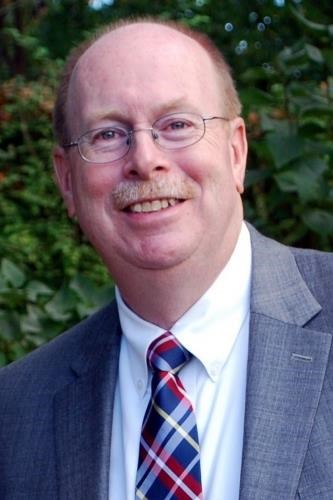 BORN
1956
DIED
2019
ABOUT
John A. Coleman Catholic High SchoolKingston High School
FUNERAL HOME
Joseph V. Leahy Funeral Home, Inc. - Kingston
27 Smith Avenue
Kingston, NY
Michael F. Jordan hurley- Michael F. Jordan of Hurley, N.Y., died suddenly on Sunday, May 12, 2019, at his home. He was born in Kingston, N.Y., on April 26, 1956; a son of the late Edward Jordan and his wife Elizabeth, (Betty McArdle). Michael was a graduate of Coleman High School, class of 1974, and then went on to Siena College where he earned a Bachelor of Science degree, majoring in History and Political Science. He studied at Albany Law School where he earned his JD. Michael was a well respected and admired attorney in Kingston, a Town of Hurley Judge, as well as a community volunteer. His career in law began as an Assistant District Attorney in Ulster County, before joining the firm of Howard St. John and Associates, and later joining Findholt & Jordan. He was dedicated to his clients, and always upheld the highest ethical standards when representing them. He also worked as a public defender, and felt his background gave him a balanced view of justice. He treated everyone with respect and dignity and always did his best in everything he endeavored. His greatest professional pleasure was helping first time home buyers achieve their dream of home ownership. Michael’s passion was giving back to his community. He volunteered as a soccer and little league coach in Marbletown and later in Hurley, as well as working with local Mock Trial teams at both Kingston High School and Bruderhof. He served as a long time board member of the Kingston Boys and Girls Club, and worked tirelessly to support their fundraising efforts to ensure the kids had the best programming possible. His heart was filled with his family and many dear friends. He cared deeply for those who he loved and wanted only the best for everyone, feeling responsible for doing everything in his power to support them. He was an honorable and kind man who always tried to do what was right. Michael leaves behind his beloved wife of 35 years, Suzanne Friedman Jordan; two beloved sons, Benjamin and Dylan Jordan; a beloved daughter-in-law, Colleen Ferry; and most precious gift, his granddaughter, Ryleigh Ann Jordan. He is survived by his siblings, Kevin and Teri Jordan of Kingston, N.Y., Edward Jordan of Kingston, N.Y., Patty Jordan, of Raleigh, N.C.; as well as his brothers and sister-in-laws, Barry and Linda Friedman of Boynton Beach, Fla., Richard and Ann Friedman of Bedford, N.H., and Tim Farris of Virginia. He is also survived by many loving nieces and nephews, as well as many close devoted cousins and dear friends. A sister-in-law, Whendi Friedman Farris, predeceased him in 1999. Funeral arrangements are under the guidance of the Joseph V. Leahy Funeral Home Inc., 27 Smith Avenue, Kingston, N.Y., www.jvleahyfh.com. Family and friends will be received at the funeral home Thursday from 3 to 8 p.m. A funeral procession will form on Friday at 9 a.m. at the funeral home. A Mass of Christian Burial will be celebrated at Saint Mary’s Church, at 10 a.m. Burial will follow at the Kerhonkson/Accord Jewish Cemetery in Kerhonkson, NY. In lieu of flowers, the family suggest donations to The Boys and Girls Club of Kingston, or a charity of your choice.
Published by the Daily Freeman from May 13 to May 16, 2019.
To plant trees in memory, please visit the Sympathy Store.
MEMORIAL EVENTS
May
16
Visitation
3:00p.m. - 8:00p.m.
Joseph V. Leahy Funeral Home, Inc. - Kingston
27 Smith Avenue, Kingston, NY
May
17
Funeral
9:00a.m.
Joseph V. Leahy Funeral Home, Inc. - Kingston
27 Smith Avenue, Kingston, NY
May
17
Mass of Christian Burial
10:00a.m.
Saint Mary’s Church
NY
Funeral services provided by:
Joseph V. Leahy Funeral Home, Inc. - Kingston
MAKE A DONATION
Please consider a donation as requested by the family.
MEMORIES & CONDOLENCES
Sponsored by dailyfreeman.com.
32 Entries
Sadly, I just learned of your passing, Michael, from a mutual friend. You were a wonderful person and an excellent attorney. You left us too soon. May you rest peacefully.
Margie DeCicco
October 19, 2019
To the Jordan family, just recently saw on the local county channel Michael F. Jordan on the list of locally deceased as I was flipping channels last night. Checked obituaries on the web to acknowledge what I saw on the local channel list. Mr. Jordan was very kind in helping John Bodnar and myself open the Woodstock Post business. His dedication to the sports programs shows he was an utmost caring person for kids and community. Sending prayers to Suzanne, Benjamin and Dylan and all of the related families. So sorry to see the news late. His legacy and devotional spirit lives on. Remember the good times.

Hugs to all of you.

With Sincere Sympathy and Regards,

My deepest sympathy
Evelina Z
May 23, 2019
We are very sad to hear about Michael. So sorry Suzanne to you and your family. With sincere sympathy. Kathy and Ron Keillor
May 21, 2019
Suzanne, we're so very sorry for yours and your entire family's loss. May his memory be a blessing. Barbara & Karl
May 19, 2019
My heart is reaching out to you and your family in Sympathy and prayer..
Sue & Tom Anticola
May 19, 2019
Dear Suzanne,Ben,and Dylan, we are so sorry to learn of Mike's passing. It was always so pleasant to see him. A very fine and good man. Alice and Wayne Harris
Wayne and Alice Harris
May 17, 2019
Dear Jordan Family,

Your father, husband, and grandfather will always be 'Mr. Jordan' to me -- my little league baseball coach and teacher. I will never forget the support he offered us and the joy he took in seeing us succeed. I am thankful that he was a part of my childhood. I offer my deepest condolences and am so sorry for your loss.

I and all the members of the RVSF are with you in spirit and deeply sorry for your loss.
Jim Sullivan
May 15, 2019
Our loss is heaven's gain. Mike was an outstanding attorney and was an even better man. I had the pleasure to work with him over many years helping people purchases houses. Huge loss to the community. Sincere condolences and prayers to the family.
Hank Pauli - Apple Valley Home Inspections
May 15, 2019
Suzanne,
We are so heartbroken for you and the boys. An awful loss for everyone who knew him. Our thoughts and prayers are with you.

Lisa and Greg Armstrong
Lisa Armstrong
May 15, 2019
My sincere sympathy to Mike's wife, family and friends.

I had the pleasure of knowing Mike through
most of his professional career and since
2000 to have worked with him directly.

He was always kind, courteous and respectful in everything he did and I will miss his warm smile.

On behalf of myself and all of my colleagues at Old Republic Title I wish peace and comfort to his wife and family.

We will miss you Mike.

Sincerest condolences at this terrible time. I remember Mike always being the "the voice of reason" and willing to jump in and offer assistance in any situation. He was a great attorney and friend and will be greatly missed
Nancy "Port"- Hagopian
May 15, 2019
OUR LOVE AND SYMPATHY GO OUT TO YOU AND THE FAMILY.
AARON&SUSAN POMERANTZ
May 14, 2019
I am deeply saddened at the loss of such a fine man. I had the pleasure of coaching Little League with Mike. My deepest condolences to Suzanne, Ben and Dylan.
Matthew Rosenthal
May 14, 2019
Very sorry to hear of Mikes passing. Another Wilbur guy gone .
Don Gregory
May 14, 2019
My deepest sympathy to the family. His loss is a crushing blow. Michael was a great man who lived a great life and has a great family. An outstanding member of the community. He will be missed. I'll always remember him for his kindness and the respect and dignity he showed for life and his fellow man. May he rest in peace.
Pete Tirc
May 14, 2019
To the entire Jordan family, please allow me to offer my sincere condolences at this very difficult time.

Over the years, I had the pleasure of working with Mike. In all instances, he was a gentleman and a true professional. No matter how busy he was, Mike would always manage to offer kind words, a helping hand and a compliment.

I do hope that the love of family and friends will help you move forward, and that the sadness which has touched your life will, in time, be supplemented with happier moments.

With My Deepest Sympathy...
Marc Weiner
May 14, 2019
I am so sorry to Michael's family & friends...
Michael, was a good man & an awesome attorney! I was a divorced mom of one & Michael helped me buy a house & I will never forget his kindness & caring.
I remarried two & a half years ago & Michael was set to do closing of the sale on my husband's home this Thursday, because we're buying another home together. When my husband called me Monday afternoon to tell me our Attorney Michael Jordan died, I was crushed & sad... Ulster county has lost a very caring, awesome attorney & this is a BIG loss for the community you blessed with your service Michael!
Many prayers for your wife & family, may you rest in peace Attorney Michael Jordan...
God Bless, Cathleen & David Whalen
Cathleen Whalen
May 14, 2019
So sorry for your loss. Michael was truly a good man.
Diane Cane (Downes)
May 13, 2019
Dear Suzanne,

My deepest condolences for your loss. Michael was truly a remarkable and generous person. Your family are in my prayers.
Marilyn Watson
May 13, 2019
Gail Lerner
May 13, 2019
Michael was a man of such high character - generous, ethical, bright, competent, and loving. The world is better for his having been here. Sending prayers and love to you Suzanne and family as you mourn his passing.
Cat Coleman
May 13, 2019
Do very sorry to read this. My condolences to all. Bill Schiff
Bill Schiff
May 13, 2019
So very sorry for your loss
Kelley Hasbrouck
May 13, 2019
Many happy memories of high school times with Michael...especially in Junior Year English, when we had the first glimpse of his quick wit when he talked in "Chaucer English". My heart goes out to you, Suzanne, and family. Rest in peace, Michael. We already miss you.
Jeanne O'Connor McDonald
May 13, 2019
Suzanne and Family,

I am so sorry to hear of the sudden loss of Mike. I work at Ulster Savings Bank and he was one of my favorite attorneys to do a closing with. He will be missed terribly. My thoughts and prayers with you all.