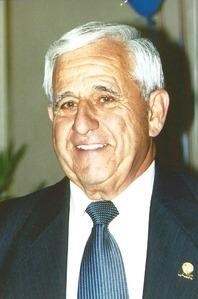 ABOUT
New Paltz High School
FUNERAL HOME
Copeland-Hammerl Funeral Home
162 S Putt Corners Rd
New Paltz, NY
NEW PALTZ- Peter J. Savago, age 89, of New Paltz, N.Y., a well-known Republican political figure and life-long resident of Ulster County, died on Sunday, April 5, 2020, at his home surrounded by his loving family. Pete was born Aug. 1, 1930 in New Paltz and was the son of the late Charles and Petrina (LaRocca) Savago, Sr. He married Ethel Ellen Ashton on Feb. 20, 1955 at St. Joseph’s Church in New Paltz, N.Y. Pete graduated from New Paltz High School in 1949. He was a proud veteran of the U.S. Army, serving from 1951 to 1953 during the Korean War in the Artillery Division. He earned the Korean Service Medal W/3 Bronze Service Stars and the United Nations Service Medal. He was the owner and president of the Peter J. Savago Insurance Corporation in New Paltz, specializing in general insurance. Savago’s political career began in 1955, shortly after returning home from the Korean War. Recognized early on by the Republican Party and constituents alike for “telling it like it is”, Savago decided to enter politics, becoming at age 25, the youngest Town Clerk in the history of his hometown of New Paltz. Pete is known in the political arena as the “Dean of Republican Chairmen” serving for many years as Senior Chairman of all the New York State Republican Committee County Chairmen. He has spent more than 45 years in various local, state and national Republican positions. He had been Chairman of the Ulster County Legislature from 1968 to 1976; served as Chairman of the Ulster County Republican Committee since 1977 and has been serving as Vice Chairman of the New York State Republican Committee since 1990. Savago is primarily recognized as the driving force behind the modernization of Ulster County New York’s form of government. He has participated in the Republican National Convention since 1980, first as an Alternate Delegate and later as a Delegate since 1984. In 1984, he was elected to the position of Chairman of the Ulster County Board of Elections and subsequently reelected to serve an additional three terms until 1997. Pete worked on national and statewide campaigns for former presidents Gerald Ford, Ronald Reagan, and George Bush, Sr., and New York Governor Nelson E. Rockefeller. He also played a key role during the beginning of Congressman Hamilton Fish’s political career. He is known within the Republican Party as being the first County Chairman in New York State to endorse George Pataki for New York State Governor. Savago has been actively involved in numerous civic and community service non-profit organizations during his political and professional career. A life member of the Volunteer New Paltz Fire Company, he is past Fire Chief. He was also a life member of Ulster County Women’s Republican Club. He served as a Board of Director member and Director of the Ulster County Cancer Society; was a Board of Director member of the March of Dimes and had been on the board of the Boy Scouts of America – Rip Van Winkle Council. He had also been on the Board of Directors of Empire State Bank. Over the years, he has been active in the Chamber of Commerce; Lion’s Club; Rotary Club and the Red Cross Gallon Club. He also coached Little League. He is a member of the VFW Ulster County Post #8645 and the American Legion Post #176. Pete is survived by his wife: Ethel; three children, Peter and Dona (Henneberger) Savago, Jr., John and Terrilee (McGarril) Savago, and Susan (Savago) and Marcus Conklin; ten grandchildren; six great-grandchildren and two more on the way. Visitation, for the immediate family only, will be held on Wednesday, April 8, 2020, from 11 a.m. to 12 p.m. at Copeland Funeral Home, 162 South Putt Corners Road, New Paltz, N.Y. Due to the coronavirus occurrence, services will be private, but a memorial service will be held in the future, after a safe date can be determined. The family suggests that memorial donations in Pete’s name be made to either Hudson Valley Hospice, 374 Violet Avenue, Poughkeepsie, N.Y., 12601, or the New Paltz V.F.W. Post 8645, 101 NY-208, New Paltz, N.Y., 12561, or to the charity of one’s choice. Copeland-Hammerl Funeral Home is honored to assist the Savago family with the arrangements. http://www.lastingmemories.com/peter-j-savago
Published by the Daily Freeman from Apr. 7 to Apr. 8, 2020.
To plant trees in memory, please visit the Sympathy Store.
MEMORIAL EVENTS
Apr
8
Visitation
11:00a.m. - 12:00p.m.
Copeland-Hammerl Funeral Home
162 S Putt Corners Rd, New Paltz, NY
Funeral services provided by:
Copeland-Hammerl Funeral Home
MAKE A DONATION
MEMORIES & CONDOLENCES
Sponsored by dailyfreeman.com.
2 Entries
Dear Ethel and FamilyOur sympathies go out to you and all the long-list of family members. Even more were his number of friends, and we consider ourselves to be, that are saddened at his passing. His friendly recognition-wave as our vehicles passed one another was a showing of Petes huge circle of friends. We go back a long time, especially with our kids and fire department experience. Pete rode the fire truck that helped save our woods when a car passed across mein our driveway! The woods caught fire with the burning car but all was soon under control with the rapid response, and the cars driver hardly injured! Pete gave a lot of himself for our town and I was happy to be asked for artwork from such a renown dignitary! We are sad to not bid a farewell during this social distancing but our sympathies and prayers are for Pete, that he now rests in peace, and you have strength in your loss and your own sensitive health! We are making a donation in Petes memory to the NP Fire Department.George & Camille (Cami) Fischer
George/Camille (Cami) Fischer
Friend
April 9, 2020
I'd like to extend my sincere sympathy to the Savago family. I alwAys admired and respected Pete. He was a wonderful man who did so much for the people of Ulster County. May he Rest In Peace. Sincerely a John Parete and family.
John parete
April 7, 2020
Showing 1 - 2 of 2 results