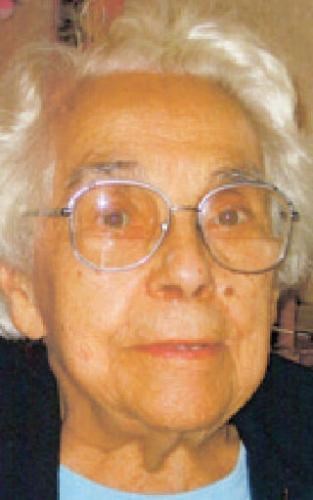 Beatrice (Ullman) Mallery, a lifelong resident of Sharon Springs, died on Sunday, December 13, 2015 at her residence. She was 106. Beatrice was predeceased by her husband, Myron; he died in 2004 at age 100. Born at the Ullman family home on Loonenburg Turnpike in 1909, she was the daughter of the late Joel and Harriette (Engle) Ullman. Beatrice was a direct descendant of early Schoharie County settler, Peter Engle. Peter was married to Sarah Warner in the Schoharie Lutheran Church in 1768. Their, son, Peter A. Engle, was Beatrice's great-great-grandfather. He built and operated mills in the early 1800's in the Engleville area within the town of Sharon. Beatrice was a 1927 graduate of the former Union School and Cobleskill College in 1929. Subsequently, she taught in area one-room schools, and then during the war, she worked making war materials at the Beech-Nut Nutrition Corporation in Canajoharie. She retired after a long career with phone companies. She enjoyed creating hooked rugs, crocheting, knitting, card games, especially bridge, and she loved to read. Beatrice and Myron were wonderful grandparents and they provided many fond memories for their grandchildren playing games of croquet, badminton, pool and cards. They also went on many trips to Catskill Game Farm, the Farmers Museum and picnics to Glimmerglass state park. Beatrice often baked pies for her grandchildren and provided them with unlimited Spaulding donuts from Sheldon's store. She was loved by all who knew her. Survivors include a son, Keith (Phyllis) Mallery of Sharon Springs; a daughter, Inez (Robert) Parker of Huntsville, AL; six grandchildren; twelve great-grandchildren; and seven great-great-grandchildren. A graveside memorial service will be announced at a later date. Memorial contributions may be made to the Sharon Springs Volunteer Rescue Squad, POB 154, Sharon Springs, NY 13459; SUNY Cobleskill Alumni Association, 211 Knapp Hall, State Route 7, Cobleskill, NY 12043; or to Catskill Area Hospice, 1 Birchwood Drive, Oneonta, NY 13820.

Published by The Daily Gazette Co. on Dec. 15, 2015.
To plant trees in memory, please visit the Sympathy Store.
MEMORIAL EVENTS
To offer your sympathy during this difficult time, you can now have memorial trees planted in a National Forest in memory of your loved one.
MAKE A DONATION
MEMORIES & CONDOLENCES
2 Entries
Dearest Keith and family...thinking about you and holding you in my heart at this difficult time. Your devoted daily care and love sustained her, and may you find peace and comfort in your happy memories. Blessings to you.
Lori Solensten
December 18, 2015
Dear Keith and Inez. Sorry to hear about the passing of your mother.
Doris Fitch
December 17, 2015
Showing 1 - 2 of 2 results