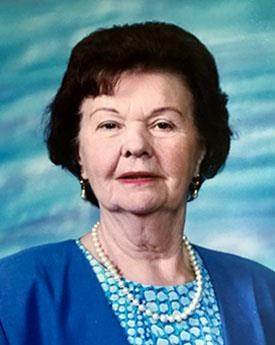 FUNERAL HOME
Muzyka & Son Funeral Home
5776 West Lawrence Avenue
Chicago, IL
Alexandra Kaminsky, nee Krechiwsky, age 90, a longtime resident of Niles, Illinois, passed away peacefully at home on July 12th, 2021 after a brave battle with Alzheimer's Disease. Beloved wife of the late John Kaminsky; loving mother of sons, Myron, Walter, and Alexander; proud grandmother of Thomas, Anne Marie, Stephen, and Lukas; dear great-grandmother of Jonathan, Sawyer, Finnegan, and Blair. Alexandra was born on January 1, 1931, in Buchach, Ukraine. Faced with economic and political hardship after World War II, she and her family immigrated to the United States to rural Michigan as part of a post-war sponsorship program. She married her husband, John in Michigan in 1952, lived in Indiana briefly, and eventually moved to Chicago. Then, like many others, during the improved conditions of the 1950s, the newlyweds left the city and relocated to the suburbs, where they built a home in Niles in 1960 and settled in with their two children as a growing family. During their early years together, she and John embraced their American dream but also became active in the Ukrainian community which was developing on the Northwest side of Chicago. In 1975, when John suffered a cerebral aneurysm and became physically disabled, Alexandra took over as a true matriarch, caring for her neurologically impaired husband, overseeing her sons' education, managing the household, and working in retail to provide financial security for the family. Her efforts were tireless until John's death in 2002. Alexandra loved being outdoors and instilled a love of nature in her children. She encouraged independence, self-respect, and strength of character. She emphasized familiarity with Ukrainian language and customs. During her last moments, the soft sound of Ukrainian music surrounded her, playing from an old record on a stereo she and John had purchased in the 1960s. Alexandra was preceded in death by her husband and parents, Michael and Irene; her sister, Zenovia; brothers-in-law, Teodor and Andrew; her brother, Eugene, and nieces, Olga and Lydia. She is survived by extended family in Ukraine; her 3 sons; sister, Lydia Grabas; nephews, Peter and John; 4 grandchildren and 4 great-grandchildren. Visitation Monday, July 19, at 11 am until time of funeral prayers in Ukrainian and English at 12 noon at Muzyka and Son Funeral Home and Cremation Services, 5776 West Lawrence Ave., Chicago IL 60630. Interment immediately afterward at St. Andrews Ukrainian Orthodox Cemetery, 300 E Army Trail Rd., Bloomingdale, IL 60108. For more information, please call 773-545-3800 or www.muzykafuneralhome.com.