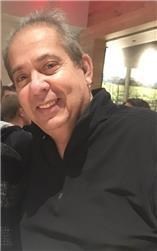 BORN
1948
DIED
2021
ABOUT
Steinmetz High School
ELGIN - Dominic "Don" Adorno, Jr., 72, passed away on Friday, September 3, 2021. He was born on December 21, 1948 to Dominic J. Adorno, Sr., and Catherine (Florina) Adorno and grew up in Chicago, IL with his siblings Lucille (late Michael), Frank Sr., (late Rose, and Judy), Marlene (John), and Victor (Veronica). He graduated from Steinmetz High School in 1966. Don married Susan Harkins and had two boys, Anthony (Angela) and Dominic (Lisa). He later married Marla Scola and added a daughter Jeni (Anthony) and son Todd (Angela) to his family. He was loved by Marla's family including her parents Frank and the late Florence, sisters Marilyn (Paul), and Maureen (Sietze), and brothers Michael and Mark. Don was a devoted grandfather to Dakota, Logan, Isabel, Joey, Lucas and Kenzie, and leaves behind many loving nieces and nephews. Don worked in home remodeling as part of his late father's company Dea Jae Builders, and later successfully ran his own company. Don enjoyed coaching sports teams, classic cars, gardening, 007 movies and the Green Bay Packers. His greatest love was his wife Marla, with whom he shared more than 30 years of marriage and countless trips and adventures. A Catholic mass and memorial reception will be scheduled for mid-2022, with details to follow. Memorial donations may be made to the Diabetes Research Institute at www.diabetesresearch.org or the National Kidney Foundation at www.kidney.org.

Published by Daily Herald on Sep. 8, 2021.
To plant trees in memory, please visit the Sympathy Store.
MEMORIAL EVENTS
To offer your sympathy during this difficult time, you can now have memorial trees planted in a National Forest in memory of your loved one.
MAKE A DONATION
Please consider a donation as requested by the family.
MEMORIES & CONDOLENCES
Sponsored by Daily Herald.
3 Entries
I remember Don very well. We had some good times and good laughs when we coached the kids in baseball. He will be missed. Condolences to the Adorno family
Augie Scolaro
September 15, 2021
I am sorry for your loss. Don was an amazing person.
Tina and Kevin Holt
Friend
September 8, 2021
Our deepest condolences to the family love you all
John&Maureen Swick family
Family
September 7, 2021
Showing 1 - 3 of 3 results