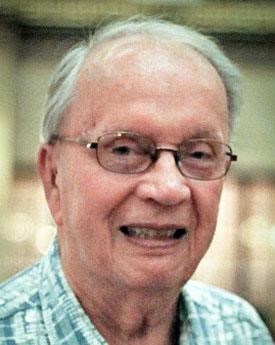 BORN
1930
DIED
2021
ABOUT
Steinmetz High School
FUNERAL HOME
Glueckert Funeral Home Ltd.
1520 N. Arlington Heights Rd.
Arlington Heights, IL
ARLINGTON HEIGHTS - Donald E. Hartung was born on August 7, 1930 to Ernest and Myrtle Hartung. He died on February 27, 2021 from traumatic injuries sustained in a fall. His Memorial Service will be held at the First Presbyterian Church of Arlington Heights on Saturday, March 6th at 11 a.m. Due to Covid restrictions the service will be by invitation only. The service will be live streamed at www.firstpresah.org. Don graduated as Valedictorian of the 1948 class of Steinmetz High School. He attended Northwestern University on a full academic scholarship and graduated with a B.S. in chemical engineering in 1953. Four days after his graduation, on June 20, 1953, he married the love of his life, Lois Stjernberg. He served two years in the United States Army Counterintelligence Corps. Don spent his entire professional career in developing pharmaceutical and consumer products. He worked for Proctor & Gamble, The Gillette Company, Dr. Scholl, and Abbott Laboratories. He retired in 1992. A man of faith, Don was active in the life of his church having been ordained as both an elder and a deacon. For more than thirty years, he was a teacher in various Christian education programs for youth and adults. Don was an avid reader. For five years, he served on the Rolling Meadows Library Board, three of them as President during the library's formative years. After he retired, he was a volunteer at the Brookfield zoo, active in Monday morning Men's Bible Study and Wednesday morning Men's Bowling. He also served as a driver for Escorted Transportation Services and Meals on Wheels. He logged 4,914 hours at the Arlington Heights Memorial Library over his twenty-seven years as a volunteer. As lifelong Chicagoans, Don and Lois enjoyed opera, theatre, and the Chicago Symphony. Don and Lois spent more than twenty years as season ticket holders for Northwestern Football. No one was more excited than he was when they went to the Rose Bowl in 1996 and that was a game where he and Lois were also in the stands. Don was also a devout Cubs' fan and his entire family rejoiced when he watched the Chicago Cubs win the World Series in 2016. He was preceded in death by his parents, Ernest and Myrtle (Jorgensen); and by his sister, Lois (Hartung) Hwastecki. His wife, Lois (nee Stjernberg) of 67 years survives him, as do three children, Judith (Kenneth) Hockenberry, Jean (Bryan) Cranfill, and Janet (Brian) Weed; and eight grandchildren, Kathryn, Jennifer, and Andrew Hockenberry, Emily and Jonathan Cranfill, Jordan, Benjamin, and Jessica Weed. In lieu of flowers, memorial contributions can be made to the First Presbyterian Church of Arlington Heights, 302 N. Dunton Ave., Arlington Heights, IL 60004, www.firstpresah.org or the Arlington Heights Memorial Library Foundation, 500 N. Dunton Ave., Arlington Heights, IL 60004-5910, www.ahmlfoundation.org/donate. Funeral information and condolences can be given at www.GlueckertFuneralHome.com or 847-253-0168.

Published by Daily Herald on Mar. 3, 2021.
To plant trees in memory, please visit the Sympathy Store.
MEMORIAL EVENTS
Mar
6
Memorial service
11:00a.m.
First Presbyterian Church of Arlington Heights
302 N. Dunton Ave., Arlington Heights, IL
Funeral services provided by:
Glueckert Funeral Home Ltd.
MAKE A DONATION
MEMORIES & CONDOLENCES
Sponsored by Daily Herald.
1 Entry
Prayers for the entire family are being sent from Southminster Presbyterian Church. We mourn with you and pray for God's comfort to be with you at this difficult time.
The Reverend Elizabeth Nickerson
March 7, 2021
Showing 1 - 1 of 1 results