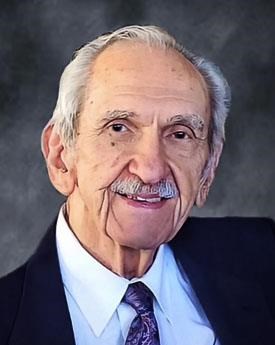 FUNERAL HOME
Countryside Funeral Home and Crematory
333 South Roselle Rd.
Roselle, IL
Frank J. Brabec passed away peacefully on July 15, joining his wife of 66 years, Mary Ann T. Brabec, who left us on January 26 of this year. He was born on December 6, 1925, in Berwyn, IL, son of Frank Brabec Sr. and Marie (Kazimour) Brabec. He and his sisters Mary (Lahlum) and Helen (Krakora) grew up on the southwest side of Chicago, where Frank became a lifelong fan of the White Sox. Frank learned to play clarinet while still in grade School at Blessed Agnes Parish, and continued on at Farragut High School. His musical endeavours were cut short by World War II, when he became a crewman on the USS Sumter, an attack transport with the US Navy. He and his fellow veterans were honored on the 50-year anniversary for their part in liberating the Philippines. After the war, he took advantage of the GI Bill and completed trade school to become a Tool and Die Maker, an occupation he kept until his retirement at age 62. Frank and Mary Ann were married on January 8, 1955, at Blessed Agnes Church. Shortly thereafter, they moved to a house they had built in Bensenville. Frank was a devout Catholic, participating as a lector, Eucharistic Minister and sang in the funeral choir at Holy Ghost in Wood Dale. He was also proud of his Czech heritage, seving as President of the National Alliance of Czech Catholics, and was active for years as a member, Chief Ranger, and state official in the Catholic Order of Foresters. One of Frank and Mary Ann's enduring passions was the love of travel. From family vacations by car to eventually enjoying cruises to various destinations, they managed to fit in visits to almost all seven continents, save Africa and Antarctica. Visitation will be from 8-10 am on Saturday, July 24 at Countryside Funeral Home in Roselle, followed by a funeral Mass at Holy Ghost in Wood Dale. Burial will follow at Queen of Heaven in Hillside. Survivors include son, Frank (Sheri) Brabec; daughter, Teri (Bob) Ciskoski; sister-in-law, Pat (Don) Chovanec; and grandchildren, Lori (Tom) Brabec-Pusateri, Frank Donald Brabec, and Magdalyn Brabec.