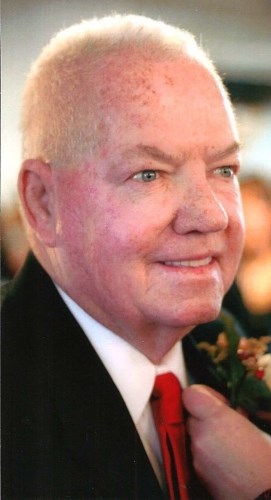 DESLOGE – Frank Hulsey, 87, of Desloge, passed away peacefully January 7, 2021, at home surrounded by family. He was born May 25, 1933, in Elvins, to the late John Highley and Nettie (Pulliam) Hulsey. Frank was a member of the Desloge First Church of God. He retired from Hager Hinge after 31 years and then drove a school bus for North County School District, where he was known as one of the "favorites." Frank enjoyed spending time with his family and waving at passing traffic, from his front porch chair.

Visitation will be held at C.Z. Boyer and Son Funeral Home in Desloge, Saturday, January 9, 2021, at 11 a.m. until service time at 2 p.m. Reverend Chuck Lotz will be officiating. Interment will follow at Knights of Pythias Cemetery in Park Hills. Memorials may be directed to St. Jude Children's Research Hospital. C.Z. Boyer and Son requires masks or facial coverings to be worn at all times. View obituary and share condolences online at www.czboyer.com.

To plant trees in memory, please visit our Sympathy Store.
Published by Daily Journal Online on Jan. 8, 2021.
MEMORIAL EVENTS
Jan
9
Visitation
11:00a.m. - 2:00p.m.
C.Z. Boyer & Son Funeral Home - Desloge
1116 N Desloge Dr. PO Box 1643, Desloge, MO 63601
Jan
9
Service
2:00p.m.
C.Z. Boyer & Son Funeral Home - Desloge
1116 N Desloge Dr. PO Box 1643, Desloge, MO 63601
Funeral services provided by:
C.Z. Boyer & Son Funeral Home - Desloge
GUEST BOOK
13 Entries
my sincere condolance to ur family i new frank and fay rip
joyce johnson
Friend
January 14, 2021
I love Frank dearly. Spent a lot of good times with him !
Jim Rouggly
Friend
January 9, 2021
I’m very sorry for your loss. Please accept my condolences.
Carolyn Heady
Friend
January 9, 2021
So very sorry for your loss. Praying for you. I know you all were blessed with a great father. So sorry you have had a rough year. Praying for God to comfort you. Enjoy the many memories you have.
Vickie Sundhausen
January 8, 2021
I send my love. Sorry for your loss
Rick Hubbard
Friend
January 8, 2021
Wonderful man with a great family! He was a positive role model in many ways and
loved by all. Drove a school bus for NC for several years and was loved by those "kids" as well!
Continued prayers for all of you.
Becky and TG Harris
Friend
January 8, 2021
He was a loving , kind and good man. We all loved Frank and always enjoyed his sense of humor . He loved to talk to people and they loved to talk with him. He was a people person. He will be missed. Prayers for the family
Mary Hulsey
Family
January 7, 2021
I’m so sorry for your loss. May God bring you peace and comfort during this difficult time.
Angela Geile
January 7, 2021
Uncle, I want thank you for talking to my dad about turning his life around and the only way to do that was except Jesus Christ as his Lord and Savior. My dad finally took your advice and gave his life to our Heavenly Father. I also remember you talking to us young bucks about turning our lives around. Our Heavenly Father is very proud of you for not being unashamed of the gospel. Uncle you have run a good race! It’s time to receive your rewards. We are sadden that you are gone but rejoicing that we know where your headed. By our faith in our Heavenly Father the Son and Holy Spirit we will see you again. Amen ❤
Dicky Hulsey
Family
January 7, 2021
May the love of friends and family carry you through your grief.
Carla and Jimmy Vasquez
Friend
January 7, 2021
So sorry for the family’s loss of this beloved man. I went to school with his kids.
Laila Mardini Curran
Friend
January 7, 2021
Dearest Hulsey Family,
Our heartfelt condolences to all of you. Our Mom (Helen) absolutely adored your precious Mom & your Dad. She considers them two of her best friends since childhood. They will forever be an inspirational love story & beautiful couple. Until we meet them again on the other side... we know they are embraced and slow dancing at this very moment... onward.