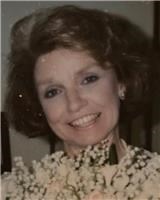 FUNERAL HOME
Memphis Funeral Home - Poplar
5599 Poplar Ave
Memphis, TN
Carolyn Taylor Miller passed away peacefully in her sleep at home on June 14, 2021, with her family in her heart. Carolyn was the center of her family and an active member of the Memphis community for more than eight decades. She recently celebrated her 87th birthday with much of her family at a family lake house on Lake Travis near Austin, Texas. Her nickname among all those who know her is Sweetie because she was gracious and loving her entire life. Carolyn was yoked in a lifelong relationship with our Lord, her family, and all her friends.

Carolyn is survived by two children, Don of Houston, and Taylor of New York City; daughters-in-law, Dana and Linda; grandchildren, Taylor, Jack, and Will, and Margaret; a two-week-old great-granddaughter; as well as siblings, Rick and Patsy; sisters-in-law, Doris Colvard and Susan Taylor; and numerous nephews, nieces and many friends who consider themselves part of her extended family. She was predeceased by her husband of many years, Dr. H. Franklin Miller, parents, and brother, Don Taylor.

Carolyn enjoyed nothing more than a celebration with a large meal joined by her family, friends, and friends of friends all gathered to share in the festivities. Christmas Eve dinners were especially joyous, with great food, a blazing fireplace, and a fully adorned tree with the Christmas angel on top. It was always a special night as everyone was welcome and all those involved still recall the celebratory events.

Carolyn had an eye for detail and she was called on by others for help in planning parties, decorating, and arranging flowers. Her business endeavors included cofounding Betty's Brownies, baking brownies for sale in Memphis stores, interior decorating, and wherever she found a need.

Carolyn was a giver and actively contributed to many local and national organizations during her long life. She remained a member of Random Readers, a book club, for the last 62 years of her life. Many of the longstanding members are high school friends with whom she reunited once she returned to Memphis in 1959 from a short posting in Guantanamo Bay, Cuba with her husband Dr. H. Franklin Miller, a US Navy officer at the time. In addition, for decades she had a luncheon bridge group with junior high school friends.

Carolyn was active with a number of organizations including being past president of the Auxillary to the Memphis Dental Society, and Maternal Welfare League where she was instrumental in procuring the first blood gas machine for premature babies at the City of Memphis Hospital. She chaired the Memphis Symphony Ball, and co-chaired the Les Passes New Year's Eve Gala. She was a member of the Ikebana Garden Club, the National Society of Daughters of the American Revolution, L'Allegro Chapter of Kings Daughters, and the Salvation Army Women's Auxiliary. She was a member of Memphi Secret Society, having been a Memphi Duchess. She volunteered with the American Cancer Society after surviving breast cancer and was active on Governor Winfield Dunn's successful campaign for Governor of Tennessee. Carolyn was involved in the formation of Trinity Baptist Church, Cordova, and is a member of Independent Presbyterian Church. She has been affiliated with Chickasaw Country Club for over 60 years.

Carolyn will be always loved and sorely missed by all who knew her.

Visitation will take place Friday, June 18 from 5:00 until 7:00 PM at Memphis Funeral Home - Poplar Chapel. A graveside service will be held at 9:00 AM on Saturday, June 19 at Memorial Park Cemetery followed by a memorial service in The Chapel at Independent Presbyterian Church at 10:00 AM. A celebratory reception will follow.