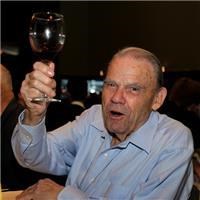 After military service, he enrolled at Georgia Tech, graduating with an architectural degree in 1948. Returning to Memphis, he married his childhood sweetheart, Mildred Emily Connor, and was apprenticed to the Faires architectural group for three years. In 1951, upon obtaining his national architectural license, he and O. T. Marshall founded Wadlington & Marshall, which was one of the largest architectural firms in Memphis until it was dissolved in 1974. From there, Gus and Mildred moved to Cleveland, Ohio where he headed up the planning and service operations for Picker International, retiring home in 1988.

After Mildred's death in 1992, Gus married the second love of his life Ruby Kay Austin, expanding his family footprint from four children to seven and grandchildren from eight to thirteen. Great grandchildren swelled the ranks by an additional fourteen, with the fifteenth on the way.

Gus will be greatly missed by this large crowd and by his extended family at St. George's Episcopal church, where he served on the vestry for 10 years, including terms as senior warden. Bringing together his love of architecture and his church, he was instrumental as a consultant to the design and construction of the new church campus, which was dedicated in 2007. Together with church friends, he formed the ROMEOs (Retired Old Men Eating Out), a group of talented friends who helped around the campus with carpentry, repairs and other needs. Gus and his close friend, Ken Wied, could often be found on Tuesday mornings at church after breakfast – checking in to see how their skills were needed.

A celebration of life service will be held at St. George's on Saturday September 25th at 2pm (COVID protocols in place) followed by an inurnment in the church's columbarium.

In lieu of flowers, memorial gifts may be made to St. George's Episcopal Church, 2425 Germantown Rd, Germantown TN.

Published by The Daily Memphian on Sep. 16, 2021.
To plant trees in memory, please visit the Sympathy Store.
MEMORIAL EVENTS
To offer your sympathy during this difficult time, you can now have memorial trees planted in a National Forest in memory of your loved one.
Funeral services provided by:
Memorial Park Funeral Home & Cemetery
MAKE A DONATION
MEMORIES & CONDOLENCES
Sponsored by Memorial Park Funeral Home & Cemetery.
3 Entries
Rest in peace Uncle Gus. A life well lived.
David Hughett
September 24, 2021
Please know your families are in our thoughts and prayers. Gus and Kay were neighbors/friends in English Meadows. Gus was exemplary in demonstrating how a person should approach, life, work and retirement, as well as faith.
Sharon Goldsworthy
September 18, 2021
Offering our deepest condolences during this difficult time.
Staff of Memorial Park Funeral Home & Cemetery
September 16, 2021
Showing 1 - 3 of 3 results