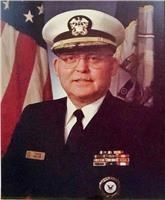 He was a devoted Christian for 79 years, a Sunday School teacher, and Deacon. He was a Neurosurgeon for 40 years, the founder of the Neuroscience Center in Memphis, Tennessee, and enjoyed Neurosurgical Academic Interchange with 27 countries. He also served as a bank director, a college trustee, authored 17 books, flew more than 5,000 hours as a pilot, was a frequent speaker on war time issues, received Navy orders for 63 years, and consulted with every US Navy Hospital in the world.