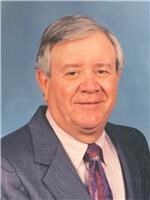 Mr. Ervin was a sports writer for the Commercial Appeal for 32 years, was a huge fan of Delta State, the Fighting Okra, where he attended college, an avid Ole Miss Rebel fan and grew up in Cleveland, Mississippi where he played the drums in the high school band and went on to play the drums in his college band, also formed a swing band with his cousin Jimmy after graduating from college. Mr. Ervin loved his soap operas, Young and the Restless, As the World Turns, Bold and the Beautiful, and was a big Hollywood Movie Buff. He served in the U.S. Army, was very respectful and honored the military as well as those who served, his entire life. Mr. Ervin was a Catfish & Hot Tamale connoisseur. He loved spending time with his kids, grandkids and great grandkids, was a season ticket holder at the Memphis Orpheum working his way to the front.He had the best life-long friends who he played golf withand was also a member of Bartlett United Methodist Church.

Online condolences may be sent at www.memphisfuneralhome.net.
Published by The Daily Memphian on Sep. 14, 2021.
To plant trees in memory, please visit the Sympathy Store.
MEMORIAL EVENTS
Sep
15
Visitation
5:00p.m. - 7:30p.m.
Memphis Funeral Home - Germantown
3700 North Germantown Parkway, Bartlett, TN
Sep
16
Funeral service
2:00p.m.
Memphis Funeral Home - Germantown
3700 North Germantown Parkway, Bartlett, TN
Funeral services provided by:
Memphis Funeral Home - Germantown
MAKE A DONATION
Please consider a donation as requested by the family.
MEMORIES & CONDOLENCES
Sponsored by Memphis Funeral Home - Germantown.
1 Entry
My brothers and I were saddened to learn of Bobby's passing. He was our mentor during our days at The Commercial Appeal. He was an exacting taskmaster who used salty language to make his point, but we were all the better for it. To this day when I look at the Scoreboard page, I shake my head and wonder what Bobby would have said if we had pulled scores from AP without distinguishing between St. Mary's-Kentucky or St. Mary's-Indiana. He knew the location and mascot of every "humpty" across the nation. We are proud to have worked with Bobby. May he rest in peace, and may God bless his family. He was one of a kind. - Chuck Weirich
The Weirich Brothers
Friend
September 15, 2021
Showing 1 - 1 of 1 results