Leonard William "Lennie" Keating
Leonard (Lennie) William Keating, 90, died peacefully at home on February 11, 2012. He was born in Bellows Falls, VT on March 12, 1921, to James and Emily Keating.
He served in the U.S. Navy and was active in the Catholic Church, including serving as a Eucharist Minister. Lennie volunteered his time at St. Vincent de Paul Society, the Coast Guard Auxiliary, the Veteran's Forty and Eight Association and was the Past Grand Knight, Fourth Degree, Knights of Columbus.
He is survived by his loving wife, Marie, seven children: Mike (Angela), John (Li), Paul (Judy), Karen (Mel), James (Sharon), Mary Ellen, and William (Tonia); step-daughter Lucy Romero and family; 13 grandchildren, one great-granddaughter and many great friends.
Rosary will be held Wednesday, February 15, at 10:00 A.M. followed by Mass at 10:30 A.M., at St. Clement of Rome Catholic Church, 15800 Del Webb Blvd., Sun City, AZ 85351. In lieu of flowers, the family suggests donations to Hospice of the Valley.
Visit this person's Guest Book at www.yourwestvalley.com
Published by Daily News-Sun on Feb. 15, 2012.
To plant trees in memory, please visit the Sympathy Store.
MEMORIAL EVENTS
To offer your sympathy during this difficult time, you can now have memorial trees planted in a National Forest in memory of your loved one.
MAKE A DONATION
MEMORIES & CONDOLENCES
2 Entries
Seems like the ones you love should still be in our midst & should live forever. Lennie was a veritable servant of the Lord and has earned his reward but we have yet to earn our own points here on earth. He has left a great legacy to those who knew him & shall be missed dearly. We send our sincerest condolences to his family and know he will always have a special place in all our hearts.
He was a great conversationalist & had a great sense of humor; it was a privilege to have known him!!
Rita & Tom
February 19, 2012 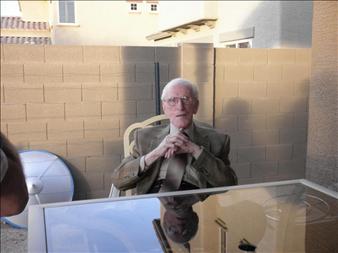