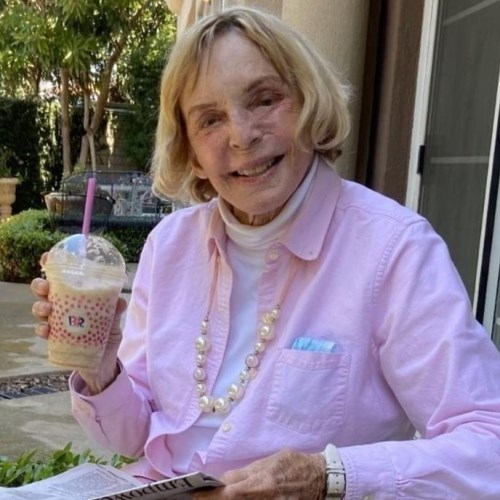 April 8, 1932 - July 17, 2021 Chris Kays
, formerly known as Chris Stewart and prior as Chris Lawler, passed away peacefully in her sleep and at her home in Newport Beach on July 17, 2021, of natural causes, surrounded by her children and grandchildren. She was 89 years old. Two weeks earlier, she suffered a severe fall, and her health declined sharply and quickly.She was born on April 8, 1932, on a farm in Penticton, BC, Canada, the only child of Viola H. Cairns and Lawrence E. Cairns. The three of them moved to Pasadena when Chris was only four and became US citizens. Chris graduated from South Pasadena High School, spending summers in the 1940s at their vacation home in Newport Beach. One of her first jobs was scooping ice cream at Will Wrights by the Coast Highway Bridge. She also, briefly, was a stewardess for TWA in 1952 flying Constellations back in the day when you had to be single to work as a flight attendant.Chris graduated from Stephens College in Columbia, MO, where she met her first husband, Michael R. Lawler; he grew up in Kansas City and was attending the Univ. of Missouri in Columbia. Together they came out to Newport Beach for Easter Week in 1952, and then both moved to Newport Beach at the end of that school year, married, and honeymooned in Havana, Cuba. They settled into a home on Commodore Road in Newport Beach where Chris enjoyed a wide circle of friends and loved to play in various bridge clubs when she wasn't changing diapers or carpooling. Her marriage to Mike Lawler produced three children, all of whom live in Newport Beach: Michael R. Lawler, Jr. (Barbara), who with his previous wife (Kathleen) gave Chris her first three grandchildren, Kellie, Brian, and Scott; Melissa Lawler McLeod (Charlie), who gave Chris another grandchild Eliza; and Drew Lawler (Linda), who gave Chris two more grandchildren, Ryan and Katie (Michael Lowhorn), and they gave her the first great-grandchild Huntleigh.Chris' second husband was Paul M. Stewart, Jr., and together they had a daughter Dana (Robert Rynone), who gave Chris two more grandchildren, George and Ben, and they all live in Binghamton, NY. There were many fun family camping trips to Yosemite and the Colorado River; lots of tennis, and days at the beach after a move to Newport Shores, with neighbors who became good friends. In 1972, with the two oldest children off to college, Chris and Paul, together with Dana and Drew, moved to Annandale, VA, when Paul took a position as an attorney in the US House of Representatives, with their vacation home in Vero Beach, FL.In 1992 she married Robert "Bobby" Kays. They met in San Miguel de Allende, Mexico, on the tennis court when she was on vacation, and he was living there at the time. They married, lived together in San Miguel for a few years, and then moved to La Quinta and then to Palm Desert.She had many passions, like tennis and travel, but she was most passionate about her family. She would always decorate the house for every holiday, she threw the best birthday parties, and she loved to find ways to make the ordinary special.Coming back full circle, Chris returned to Newport Beach in 2014 to live on Little Balboa Island to be near her children and grandchildren. For the past few years, Chris lived at Atria Newport Beach, an assisted living residence, and her family thanks all the caregivers there for their wonderful caring and love.Chris will long be remembered by family and friends for her adventurous spirit (she was thrilled to have climbed Mount Whitney after delivering her fourth child); her openness to always make new friends, positive outlook on life; competitive bridge playing, and above all, the love for her family and her strong faith in Jesus Christ. Chris was a member of St. Andrews Presbyterian Church. Services are scheduled at St. Andrews at 3pm on September 22nd.
Published by Daily Pilot on Sep. 12, 2021.
To plant trees in memory, please visit the Sympathy Store.
MEMORIAL EVENTS
Sep
22
Service
3:00p.m.
St. Andrews
CA
MAKE A DONATION
MEMORIES & CONDOLENCES
0 Entries
Be the first to post a memory or condolences.