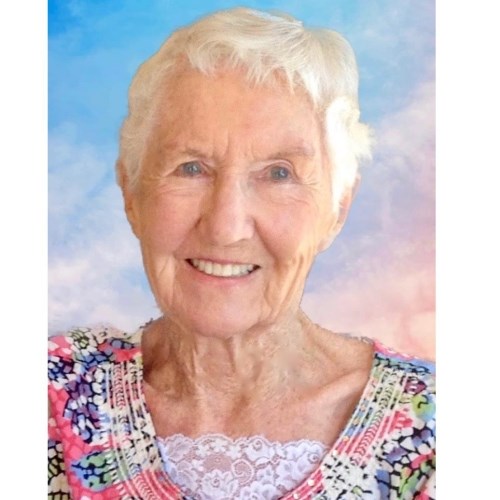 March 4, 1921 - July 22, 2020 Gwen Johnson
lived a beautiful, blessed life and cared deeply about serving others. She is remembered for her giving nature and generous spirit. Married for almost 74 years to Jim Johnson, she passed away peacefully at 99 years old, the month after Jim's passing in the summer of 2020. Fondly known as the "Gwims," Gwen and Jim lived in Corona del Mar for 49 years, where they were actively engaged in their community and volunteer outreach. Gwen was born to Esther and Alvin Danielson in 1921 on a farm in New York Mills, MN, as the fifth of six children. The family moved to Annandale, MN when Gwen was five years old. Growing up, she played basketball, tap danced, and played the saxophone. She then went on to St Cloud State Teacher's College where she earned a bachelor's degree in Education, while serving as a lifeguard and teaching swimming lessons in the summer. She taught 2nd grade in Breckenridge, MN, and then became a stewardess for American Airlines. She flew on DC-3 planes with 21 passengers and loved telling stories about her various flights. During that time in the 1940's, she lived in the Hollywood Hills, where she met Jim who was stationed at Camp Pendleton with the USMC. They were engaged three months later, and Jim was sent to Guam. When WWII ended, Gwen and Jim were married on August 31, 1946, in her hometown of Annandale.The Johnsons lived in many places before settling in Corona del Mar - North Dakota, Arizona, Montana, New Mexico, Mississippi, Catalina Island, and Hawaii. Gwen loved their eight years in Kailua, Oahu, and always held a special place in her heart for the islands. Along the way, Gwen and Jim had three daughters Jennifer, Callie and Melissa.Wherever the family lived, Gwen volunteered and was active in their United Methodist Church. She and Jim served on many domestic and international mission work teams, including Kenya, South Africa, Palestine, Zimbabwe, Guatemala, and Kauai post-Hurricane Iniki. They also helped rebuild burned down churches in the South. Locally she and Jim were involved with SOS and the Orange County Interfaith Shelter and received a Community Leadership Award from OC Human Relations. She also enjoyed her involvement with Women of Vision, the Philharmonic Society of Orange County, Alta Bahia, and the Kiwi Club, an organization of past and present American Airlines flight attendants. Gwen had an adventurous spirit, which was demonstrated by rafting down the Colorado River and trekking the Himalayas in Nepal with Jim. She celebrated her 90th birthday by skydiving, which was a true testament to her sense of adventure. She loved her daily walks and swims. Along with her inspiring marriage to Jim, Gwen leaves her legacy of faith, love of family and friends, thoughtfulness, generosity, and compassion for the vulnerable, displaced and oppressed. Gwen is survived and forever loved by daughters Jennifer Lord (Bryan) and Melissa Johnson, sister-in-law Grace Prince, grandchildren Anna Smyers, Sarah, Noah and Jonah Schopfer, great-grandchildren Harley, Julia, Mercy & Jackson James, great-great grandson Tre, son-in-law John Schopfer, and many nieces, nephews and goddaughters. She was preceded in death by her husband Jim and daughter Callie Schopfer. A public celebration of life will be held for both Gwen and Jim on Saturday, August 21, 2021 at 1:00 p.m. at the Newport Center United Methodist Church. Donations in their memory may be made to the Newport Center United Methodist Church, 1601 Marguerite Avenue, Corona del Mar, CA 92625.
Published by Daily Pilot on Aug. 20, 2021.
To plant trees in memory, please visit the Sympathy Store.
MEMORIAL EVENTS
Aug
21
Celebration of Life
1:00p.m.
Newport Center United Methodist Church
1601 Marguerite Avenue, Corona del Mar, CA
MAKE A DONATION
MEMORIES & CONDOLENCES
0 Entries
Be the first to post a memory or condolences.