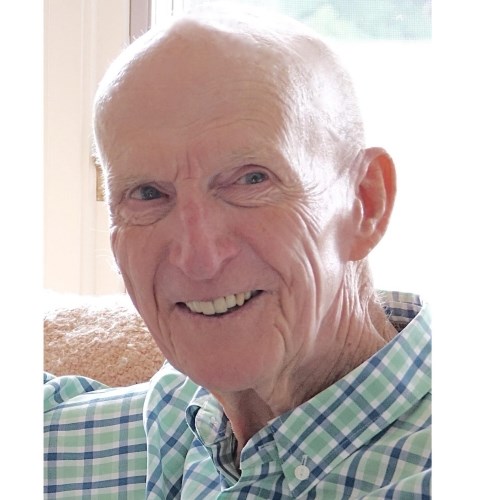 January 5, 1923 - June 15, 2020 Jim Johnson
lived a full and generous life and blessed all who knew him throughout his 97 years. He and his wife, Gwen, lived in Corona del Mar for 49 years before they both peacefully passed away a month apart in the summer of 2020. They were married for almost 74 years and were admirable members of the Greatest Generation. Jim was born to Gilbert and Margaret Johnson in Williston, North Dakota, in 1923. As an Eagle Scout at age 14, he attended the first Jamboree of the Boy Scouts of America in 1937 along the Potomac River in Washington, D.C. While a student in college at the University of North Dakota (UND), he enlisted in the U.S. Marine Corps in 1942 and advanced to the rank of 1st Lt. Called for active duty in 1943, he was first sent to Purdue University for special work under the V-12 program, then to basic training at Parris Island, SC, further training at Camp Lejeune, NC, and Officer Candidates School at Quantico. When he was stationed at Camp Pendleton, he met Gwen Danielson on a blind date in the Hollywood Hills. They were engaged three months later, and he was sent to Honolulu and Guam. After WWII ended, he and Gwen were married on August 31, 1946, in Annandale, MN. Jim then returned to college and received a bachelor's degree in Engineering from UND, where he was a member of the Kappa Sigma fraternity.Jim's engineering career spanned over 40 years and all seven continents. He served as President of Holmes & Narver, an integrated engineering and construction company, headquartered in Orange, CA, for 18 years until his retirement in 1988. Company projects included the redesign of John Wayne Airport, military base operations and maintenance, aerospace air pollution control systems design, and the 1984 U.S. Olympics security system design. The firm also provided scientific support services to the U.S. Antarctic Research Program. Jim had previously served as general manager of H&N's Pacific division on Oahu where his family lived for eight years. Prior to Hawaii, the family lived in Montana, Arizona, New Mexico, Mississippi, and on Catalina Island. After a post-retirement trip to Antarctica where he served as an environmental observer for the National Science Foundation, Jim and Gwen spent the next 20+ years volunteering and serving on domestic and international mission trips through their United Methodist Church. Projects included building irrigation systems, dental clinics and churches in many countries, including South Africa, Kenya, Zimbabwe, and Guatemala. They also built homes with Habitat for Humanity in South Dakota. Jim especially enjoyed his trip to Ireland with the UC Irvine Center for Citizen Peacebuilding, which he and Gwen supported, as well as serving the Red Bird Mission in the Kentucky Appalachians.In his later years, Jim was known for his baking ministry and loved sharing his cookies and breads with everyone. He will be remembered by his warmth and kindness, inspiring marriage to Gwen, love of family and friends, and gentle yet strong spirit. Jim is survived and forever loved by daughters Jennifer Lord (Bryan) and Melissa Johnson, sister Grace Prince, grandchildren Anna Smyers, Sarah, Noah and Jonah Schopfer, great-grandchildren Harley, Julia, Mercy & Jackson James, great-great grandson Tre, son-in-law John Schopfer, and many nieces, nephews and goddaughters. Jim was preceded in death by daughter Callie Schopfer. A public celebration of life will be held for both Jim and Gwen on Saturday, August 21, 2021 at 1:00 p.m. at the Newport Center United Methodist Church. Donations in their memory may be made to the Newport Center United Methodist Church, 1601 Marguerite Avenue, Corona del Mar, CA 92625.
Published by Daily Pilot on Aug. 20, 2021.
To plant trees in memory, please visit the Sympathy Store.
MEMORIAL EVENTS
Aug
21
Celebration of Life
1:00p.m.
Newport Center United Methodist Church
1601 Marguerite Avenue, Corona del Mar, CA
MAKE A DONATION
MEMORIES & CONDOLENCES
0 Entries
Be the first to post a memory or condolences.