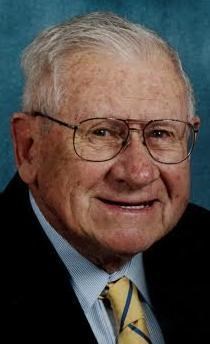 BORN
1918
DIED
2015
FUNERAL HOME
Peninsula Funeral Home
11144 Warwick Boulevard
Newport News, VA
NEWPORT NEWS - Marcus Clifton Burnette passed away peacefully on the evening of December 6, 2015 at the age of 97. Known as Cliff to his many friends on the Peninsula, he was born on June 29, 1918 in Rocky Mount, NC to Alexander Washington and Sarah Jessinee Hawley. He had two older brothers (A.W. Jr and Oscar Stone Burnette), a younger sister Gretchen Burnette, and a younger brother William Robert "Bill" Burnette, the only one of his original family to survive him. Growing up in Rocky Mount during the Depression, Cliff joined the U.S. Navy shortly after Pearl Harbor, serving with the Naval Air Transport Service in the Caribbean. After his discharge, he attended William and Mary College before joining two of his brothers at Equitable Life Insurance, where he achieved success, distinction and joy for 55 years. Four years later, he courted and married Anne Colonna Rouse, a widow living across the street with her eight-year old son John. Six years later, the family was blessed with a daughter, Sarah. They built a home on Mallicotte Lane, a neighborhood he helped to develop, and lived there for 45 years before downsizing to Stratford Manor. Cliff was originally a member of Trinity Methodist Church, but transferred on his marriage to St. Andrew's Episcopal Church, where he served on the Vestry and School Board. He also served on the Board of Directors for the James River Country Club, where he was an avid golf and tennis player, before transitioning in his later years to gin rummy and bridge. Each May for many years, Cliff played hundreds of rounds of golf in the Southeast U.S., as well as Bermuda, Canada, England and Scotland with a group of friends known as the "Yamoshitas," what he called "one of the highlights of my life." He was also a founding member of the Peninsula Kiwanis Club and the Dick Woodward Men's Bible Breakfast. Cliff is survived by his wife of 57 years Anne Colonna Rouse Burnette, stepson John Dashiell Rouse, MD of San Francisco, daughter Sarah Burnette Conrad (married to Roger Conrad) and three grandchildren (Nathaniel Randolph "Nate", Annlouise Compton, and Clifton "Stuart"), all of Alexandria, VA; brother Bill Burnette of Norfolk and four nephews: William R. Burnette Jr of Virginia Beach, Michael B. Burnette of Norfolk, O. Stone Burnette of Washington, D.C. and John A. Burnette of New Bern, N.C. Cliff lived his 97 years with gusto, relishing family, golf trips, and fellowship. His talent for making friends was legendary, and he strove to bring happiness wherever he went. A memorial service will be held at St. Andrew's Episcopal Church, 45 Main Street, Newport News on Thursday, December 10 at 1:00 PM. Arrangements are in the care of Peninsula Funeral Home.
Published by Daily Press on Dec. 9, 2015.
To plant trees in memory, please visit the Sympathy Store.
MEMORIAL EVENTS
Dec
10
Memorial service
1:00p.m.
St. Andrew's Episcopal Church
45 Main Street, Newport News, VA
Funeral services provided by:
Peninsula Funeral Home
MAKE A DONATION
MEMORIES & CONDOLENCES
Sponsored by Peninsula Funeral Home.
5 Entries
Anne, was so sorry to hear of Clifs passing. I am in Hawaii now and read it in the newsletter from St. Andrews. I loved living near you both in Stratford Manor and miss seeing your smiling faces. My thoughts and prayers go out to you and your family.
Love to all,
Elizabeth Arnett
December 16, 2015
May God bless you and your family in this time of sorrow.
JF
December 10, 2015
My condolences to Anne, Sarah and John, Bill and all of the family. Cliff was a gentleman to the core and a blessing to his family, friends and community. He will be greatly missed.
Rob Saunders
December 10, 2015
So sorry to hear about your loss. You know that God and Jesus are in the best position to comfort us when we lose a loved one in death.
T Griffin
December 9, 2015
Anne,Bill and other family members sorry to read about Cliff's passing can not attend services tomorrow I am scheduled for surgery but will be thinking about you all...Take Care
Tommy Powell
December 9, 2015
Showing 1 - 5 of 5 results