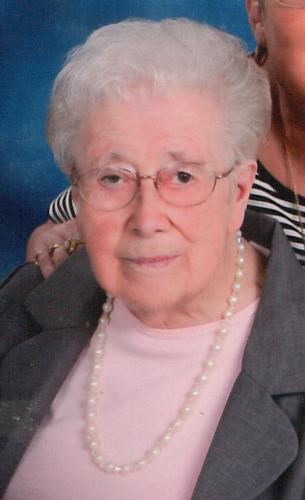 BORN
February 27, 1921
DIED
January 12, 2016
FUNERAL HOME
W. J. Smith & Son Funeral Home - Newport News
210 Harpersville Road
Newport News, VA 23601
YORK COUNTY - Ruby Frances Hudson went to be with her heavenly father on Tuesday, January 12, 2016 at the home of her daughter. She was born February 27, 1921 in Augusta County, VA, the oldest of eleven children. She was a member of Orcutt Baptist Church and attended Sunday school there. She met and made friendships with so many over her years from when she delivered newspapers in her earlier days to later on selling Avon for more than 30 years, where she won multiple awards for the President's Club. She was a member of the Birdella Home Dem Club; was an excellent seamstress and did alterations for many friends and neighbors. She had so many talents, including her love for gardening veggies, fruits, pecans, and flowers, and her hand work from quilting to crocheting. Survivors include her daughter Brenda Ramsey; her son Joseph Hudson (Debbie); her sister Helen Berry; her brother Hunter Fauber (Alice); grandchildren Christy Wilson (Mark), Lori Riesbeck (John), Jimmy Hudson, Brandi Truckenmiller (Stephen), Courtney Ruiz (Renan) and Ryan Hudson; nine great-grandchildren and one great-great grandchild; numerous nieces and nephews; and her wonderful long time neighbors who she cared so much for. She was preceded in death by her children, Joyce and Jimmy; parents Brenard and Mamie Fauber; brothers Raymond, Elwood, Scraper, Billy Fauber; sisters Muriel Baber, Sylvia Johnson, Ruth Taylor, JoAnn Johnson. A visitation will be held from 12:30 PM to 1:30 PM on Saturday, January 16, 2016 at Orcutt Baptist Church, with a funeral service immediately following at 1:30 PM. Burial will be in Peninsula Memorial Park. The family would like to express their many thanks to Hampton PACE, especially Dr. Pettijean, Susan Thomas, and Chaplain Dr. Will Lowrance for their wonderful care. A special thanks to Ramona Ivory who became her special angel. Memorial donations may be made to Orcutt Baptist Church, attention Senior Care Committee, 653 Baxter Lane, Newport News, VA 23602. Arrangements by W. J. Smith & Son Funeral Home.
To plant trees in memory, please visit our Sympathy Store.
Published by Daily Press on Jan. 14, 2016.
MEMORIAL EVENTS
Jan
16
Visitation
12:30p.m. - 1:30p.m.
Orcutt Baptist Church
Jan
16
Funeral service
1:30p.m.
Orcutt Baptist Church
Funeral services provided by:
W. J. Smith & Son Funeral Home - Newport News
MEMORIES & CONDOLENCES
Sponsored by W. J. Smith & Son Funeral Home - Newport News.
11 Entries
Brenda,
So sorry to hear of the passing of your dear Mother. I remember her fondly from Orcutt Avenue and from when we lived on Oak Avenue. My thoughts and prayers are with you at this time.

Brenda Insley
Henrico, VA
January 30, 2016
So sorry to hear about Ms Ruby's passing. She watched me grow up and was such a sweet lady. Your family is in my thoughts and prayers
Jessica sequist & Colleen halapin
January 21, 2016
" I'm sending my most heartfelt sympathy during this difficult time. Please know that GOD cares for you PSALMS 18:1,2
January 20, 2016
Mrs. Hudson was my AVON for about twenty years. I met her when I lived at Tivoli Apartments, she knocked on my door and offered me a book and I was hooked. My kids remember going to her house to get my orders, the big Magnolia trees, the fireplace, smell of something good cooking, and all kinds of crafts in progress all over. She was a special lady in every way, and I am glad to have had her as a friend.
May Gods Peace and Perfect Love comfort the Family today and always.
Dana Darden Ramirez
January 16, 2016
Joe, I am so sorry for your loss. Sending prayers your way for you and your family.
Diana Wagnitz
January 15, 2016
So sorry to hear about your loss. You know that God and Jesus are in the best position to comfort us when we lose a loved one in death.
T Griffin
January 15, 2016
Brenda,
My condolences go out to you and your family. I am so sorry to hear about the passing of your mother.
It has been many years since I have seen you, but never forgot you remembering the old days in the Tape Library at NNS.
Stay strong and God will comfort you.

I knew your mama & family from Parkview Baptist Church.

Please accept our love & prayers in your loss.
Mark & Miriam Olson Waggoner
January 14, 2016
It is with sadness that I have read of the passing of such and sweet and kind lady. I met ruby 45 years ago when her daughter, Brenda and I shared a room at the hospital when our children were born. Ruby was a gentle lady and always helping others. She became my Avon lady and was really a sharp saleswoman. I know the family will miss her but I also know they are pleased that she is now free of discomfort and walking the streets of gold with her savior. May the Lord comfort each family member and may they all keep Ruby alive in their hearts.
BARBARA BANTON
January 14, 2016