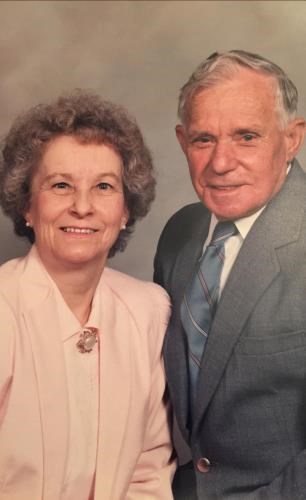 FUNERAL HOME
R. Hayden Smith Funeral Home - Hampton
245 South Armistead Avenue
Hampton, VA
HAMPTON - William "Bill" Randle Black, 89, died peacefully at home February 28, 2017. The son of Randle and Myrtle Black, he was born in Barboursville, West Virginia. Bill proudly served his country in Vietnam and retired from the U.S. Air Force. He also worked and retired from the Veteran's Administration in Hampton. Bill was a dedicated member of Calvary Assembly of God Church. He was a devoted husband, father, and grandfather. Bill was preceded in death by his parents; beloved wife of 66 years, Aurelia Louise Black; daughter, Patsy L. Kinser; his brothers Jack Black and Tom Black; sisters Nancy Hineman and Clara Jean Black Murray, and brother-in-law Paul Murray. Survivors include sons William M. Black and Ronald K. Black; sister Betty Shelton; sister-in-law Virginia Burks; 7 grandchildren, 15 great-grandchildren and 1 great-great grandchild. The family will receive friends at R. Hayden Smith Funeral Home, Hampton, Virginia on Thursday, March 2, 2017 from 6-8 PM. A funeral service will be conducted by Pastor David Highlander at the funeral home on Friday, March 3, 2017 at 2 PM. Interment will follow in Parklawn Memorial Park. In lieu of flowers, donations may be made in Bill's memory to The Alzheimer's Association. "Do not let your hearts be troubled. You believe in God; believe also in me. My Father's house has many rooms; if that were not so, would I have told you that I am going there to prepare a place for you? And if I go and prepare a place for you, I will come back and take you to be with me that you also may be where I am." John 14:1-3.
Published by Daily Press on Mar. 2, 2017.
To plant trees in memory, please visit the Sympathy Store.
MEMORIAL EVENTS
Mar
2
Visitation
6:00p.m. - 8:00p.m.
R. Hayden Smith Funeral Home - Hampton
245 South Armistead Avenue , Hampton, VA
Mar
3
Funeral service
2:00p.m.
R. Hayden Smith Funeral Home - Hampton
245 South Armistead Avenue , Hampton, VA
Mar
3
Interment
Parklawn Memorial Park
VA
Funeral services provided by:
R. Hayden Smith Funeral Home - Hampton
MAKE A DONATION
Please consider a donation as requested by the family.
MEMORIES & CONDOLENCES
Sponsored by R. Hayden Smith Funeral Home - Hampton.
6 Entries
I will miss Louise & Bill both. They were special friends for many years. I am so sorry I could not attend his funeral. I was not aware that he had passed. Saw him at church a week or so before this & talked with him. He was missing Louise. I am so glad that they are together again in their heavenly home. They are blessed indeed.
Dorolyn Moyle
March 31, 2017
uncle BILL was a wonderful man .. he did a great job taking care of {lou} as he called her for several years .. she & my dad , being brother & sister,s passed away of the same thing .. veronica & myself are truly sorry we could not be there .. i will always remember him & our last conversation after my dad passed away i hope to see all of my family again some day ..until then uncle bill ,, or as lou called him ,, {BILLY} we all love you ..
tim murray
March 6, 2017
May God bless you and your family in this time of sorrow.
Syble Cannada
March 3, 2017
So very sorry for yourloss . May fond memories comfort you in your time of grief . Psalms 147 : 3
March 3, 2017
Mr.Black will.b missed but.is now reunited with the.love.of his.life...How He missed Louise and.spoke.of.her often..They were perfect.examples of a christian.They were a lovely couple!!!
Jan Ferguson
March 2, 2017
We are grateful for the time we knew Bill and Louise. They always had a smile, a great big hug, and word of encouragement for us. They were very special people who made a difference in our lives.
Christie Noble
March 2, 2017
Showing 1 - 6 of 6 results