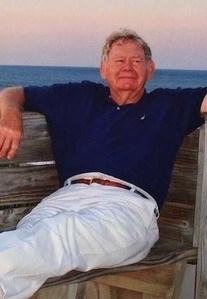 Grover Harold Faulconer, 85, of Orange, Virginia, passed away at his home on Thursday, September 24, 2020. He was born on January 29, 1935, in Madison, Virginia, to William Hamilton Faulconer Sr., and Violet Watson Faulconer.

He is also survived by his pride and joy, his grandchildren, Julius Andrew Coppa III, Catherine M. Gray (Ryan), and Mary B. Miller (James).

As a student in Madison County, Harold excelled in football and track. After graduating, he served as a Sergeant in the United States Army, stationed at Killeen Base from 1954 to 1956, then in the Army Reserve until 1963. Following his discharge, Harold was a lineman and construction supervisor at Dominion Virginia Power until his retirement. Early in life, he was an active member of the local Jaycees and Lion's Club. He was a past master of the Independent Masonic Lodge #138 and well known for teaching the catechism to many of its members.

As a member of St. Thomas Episcopal Church for 58 years, Harold worked tirelessly for the betterment of his church. No task was too small or too large, from serving on the Vestry as Junior Warden to mowing the lawn, painting Sunday School rooms, or repairing the outside shutters.

Harold took great pride in tending his lawn and gardens. He spent countless hours in his workshop repairing and refinishing furniture. His handiwork can be found proudly displayed in the homes of each of his family members.

Harold was an avid reader and loved puzzles. He also loved to travel. From the Cliffs of Moher to the beaches of Kennebunkport, Harold and Anne Meade were always planning their next trip. Annual family vacations to the Outer Banks were a special source of joy, as he delighted in spending time with his family. He was happiest when surrounded by his children and grandchildren.

Those who had the good fortune of knowing Harold can attest to his genuine character, to his kindness, and to his sense of humor. He could often be found around town offering a helping hand, walking the track, or sharing a laugh with friends and strangers alike.

Harold's family will inter his ashes in the St. Thomas Memorial Garden on Saturday, October 3, 2020, at 1 p.m. We ask that all those attending this celebration of his life wear a mask and maintain a safe social distance. A reception will be held at a later date.

Harold spent a lifetime in service to others.

In lieu of flowers, a contribution to a charity or organization special to you would be a fitting honor to his memory.

To plant trees in memory, please visit our Sympathy Store.
Published by Orange County Review on Oct. 1, 2020.
MEMORIAL EVENTS
Oct
3
Interment
1:00p.m.
St. Thomas Memorial Garden
GUEST BOOK
5 Entries
Sending our deepest Prayers & condolences to the family. We are So Very for your loss. God bless you all!!!
Doug & Billie Richey
October 5, 2020
Grover was a special person. I worked with Grover at Dominion Va Power (Orange office). He was kind and would do anything for you. God bless. Prayers go out to his family.
Debbie Breeden
October 1, 2020
Mrs. Faulconer, Carol and Marty, I was so sorry to hear about Mr. Faulconer passing. He was a wonderful person. Always happy and a smile on his face. He will be deeply missed by all of the lives he touched over the years. Sending you all my love and prayers d
Glenna Crawford
September 29, 2020
I worked with Grover during the seventies in Orange when I was a lineman trainee. I saw him a few times over the years and was always thrilled to see him and amazed how he never seemed to change. He was a wonderful person to work with and for. He truly looked out for the safety of the younger and inexperienced guys . It has been a Blessing to my life to have been privileged to have been a friend of his. I can say that everyone who worked with him loved him. Respectfully, Charlie Kardos
Charlie Kardos
September 29, 2020
SORRY FOR YOUR LOSS
toms automotive
Friend
September 29, 2020