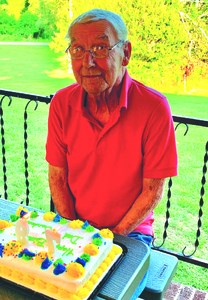 He was born at home on June 29, 1941, in Orange County, Virginia. He was the son of the late Wilmer Robert Tusing Sr. and the late Maude Inez Jones Tusing. He was preceded in death by his sisters, Connie T. Morris and Joyce T. Dobyns, both of Orange, and his brother, Wilmer Robert Tusing Jr., of Barboursville. He was also preceded in death by the love of his life, his wife of 53 years, Ethel Rae Tusing.

Jerry was a Tractor Trailer driver for many years. After an injury to his eye, he was forced to retire from driving tractor trailers. Jerry has driven in 48 of the 50 states, and Mexico too. Jerry always stated that the reason he never drove in the remaining 2 states was because the "the tractor trailer couldn't tread that much water". He finished out his driving career making deliveries for Orange Steel Roofing Products.

Jerry was a member of the Loyal Order of the Moose of Orange County. When he and Ethel were able to go, they enjoyed many dances on that dance floor, along with numerous friends. He always enjoyed going to the beach on vacation on the fourth of July to Ocean City, Maryland. Needless to say, those "Beach Vacations were epic." Some of the best memories of his life were created at the beach! Many heartfelt thanks need to go out to Lowell and Barbara Thomas, for creating so many wonderful memories in Ocean City, Maryland. "The Sea Raider III," Dad always said, "Lowell and Barbara helped create some of the best vacations our family and friends have ever had."

Lowell and Jerry had some unique crabbing experiences together over there, but that's another story for another day! Jerry loved his family dearly. He loved his friends just as much. He was a strong, independent man, that didn't mind voicing his opinion and his stubbornness when he thought he was right about something. He loved his grandchildren dearly and would play with them hours on end – he was their "Granddaddy Fat-Belly." He was also a devoted, loving husband to Ethel. He vowed to take personal care of her until his own health started to decline in 2016. He lost her in 2019. He fought to stay alive for his kids and grandchildren, after being diagnosed with stage 3 lung cancer in October 2016. He beat all the odds and thank God we got to keep him with us for almost 4 years.

Jerry is survived by his daughters, Teresa T. Carroll and husband, Mike, of Orange, Susan T. Rickard and husband, Preston, of Orange; son, Gerald G. Tusing and wife, Teresa, of Gordonsville; sisters, Shirley T. Lee and husband, Randolph, of Annandale, Va., and Barbara T. Dodson of Washington, Ga.; and six grandchildren, Miranda Henry, Lauren Tusing, Dustin Tusing and fiancée, Beth Saunders, Brandon Carroll, Christopher Carroll, and Brittney Rickard. The family wishes to thank Martha Jefferson Hospital Nurses and Doctors for their care and support during our father's multiple stays there. We would also love to express our utmost gratitude to Dr. Andrew Romano and all of the staff at the Phillips Cancer Center for your love and care of our father. He grew to love you guys!! Many Thanks!!

A graveside service will be held at Holly Memorial Gardens in Charlottesville, Va., on Wednesday September 16, 2020, at 11 a.m. Pastor William "Buster" Payne officiating. Arrangements are being handled by Preddy Funeral Home of Gordonsville.
To plant trees in memory, please visit our Sympathy Store.
Published by Orange County Review on Sep. 17, 2020.
MEMORIAL EVENTS
Sep
16
Graveside service
11:00a.m.
Holly Memorial Gardens
, Charlottesville, Virginia
GUEST BOOK
2 Entries
My deepest sympathy to the family of Jerry G. Tusing. May you be comforted in knowing that our Heavenly Father cares for you. He will give you strength and courage to cope with your grief. (Psalm 94:17-19)
N. Stewart
Neighbor
September 14, 2020
My condolences to the family . May you find comfort in your treasured memories
and Gods promise to return our loved ones . 1st Thessalonians 4 : 13 & 14 .
September 14, 2020