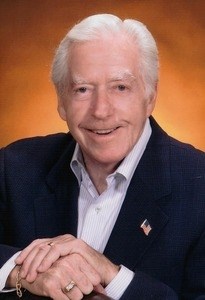 John had a long and illustrious career in association management culminating in his 12-year leadership of the International Association of Food Industry Suppliers from which he retired in 1997. Previously, he was the CEO of the Manufactured Housing Institute, the National Lumber and Building Material Dealers Association and the National Peanut Council during the Administration of the world's most famous peanut farmer, President Jimmy Carter.

He was particularly proud of his achievements as a Sergeant in the U.S. Marine Corps, a member of the U.S. Chamber of Commerce's Committee of 100, a board member for the American Society of Association Executives, an inductee in the RV/MH Hall of Fame and a commissioner for the California Commission on Housing and Community Development, appointed by then-Governor Ronald Reagan.

Born to John and Anne Martin in Fort Smith, Arkansas, he was a 34-year resident of California before relocating his family to Chicago, then Northern Virginia. Since 1997, he has resided in Lake of the Woods near Fredericksburg, Virginia. He was predeceased by his first wife, Doris.

John is survived by his devoted wife of 25 years, Bonnie; his four children and their spouses, Rand (Gene) of Sacramento, California, Mitch (Chris) of Clifton, Virginia, Ric (Mary) also of Clifton, and Krissy (Tim) of Fredericksburg, Virginia, as well as many loved and loving grandchildren and great-grandchildren. He will be especially missed by Sailor, his Pomeranian who stayed at his heel 24 hours a day.

Not one to disappear into retirement, John was well-known and respected around the Lake of the Woods community. He volunteered through the Lake of the Woods Church and was a life line to many seniors who couldn't fulfill all of their own needs, ferrying them to medical appointments, bringing them food and providing them an ear whenever they needed. His help to the community extended to its youngest residents as well, often squiring neighborhood children safely to their bus stops.

In lieu of flowers or other remembrances, the family invites you to contribute to any of John's favorite charities, including Lake of the Woods Church (lowchurch.org/give), or Lake of the Woods Fire and Rescue (lowfr29.com/product/donate/).

A private celebration of his life will be held at a future date. An online guestbook is available at johnsoncares.com.
To plant trees in memory, please visit our Sympathy Store.
Published by Orange County Review on Sep. 24, 2020.
MEMORIAL EVENTS
No memorial events are currently scheduled.
To offer your sympathy during this difficult time, you can now have memorial trees planted in a National Forest in memory of your loved one.
GUEST BOOK
0 Entries
Be the first to post a memory or condolences.