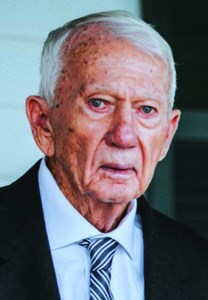 Born on July 13, 1929, in Albemarle County, he was the son of the late Lucian E. and Minerva G. Hicks. In addition to his parents, Alvin was preceded in death by his brothers, Norman, Cecil, Herman, and Ollie Hicks and sisters, Hazel Hunt, Ozella Norman, Doris Gibson, and Mabel Hicks.

Alvin was President of Brunton & Hicks, Inc, founded in 1962, and retired from the company. He also served in the United States Army.

He enjoyed hunting and fishing but especially loved his garden and was always eager to share and show off the fruits of his labor.

The family will have a private gathering and a graveside service on Friday September 24, 2021.

Condolences may be offered to the family at teaguefuneralhome.com.

Published by Daily Progress from Sep. 22 to Sep. 23, 2021.
To plant trees in memory, please visit the Sympathy Store.
MEMORIAL EVENTS
To offer your sympathy during this difficult time, you can now have memorial trees planted in a National Forest in memory of your loved one.
Funeral services provided by:
Teague Funeral Home
MAKE A DONATION
MEMORIES & CONDOLENCES
Sponsored by Teague Funeral Home.
3 Entries
To all the Hicks family. I don't get the paper so just saw this. I am so very sorry to hear of Mr Hicks' passing. My heart breaks for all of y'all. He was such a nice, sweet man. I love you all and am keeping you in my thoughts and prayers. God Bless RIP Mr Hicks
Phyllis Ganoe
Friend
September 29, 2021
Ellen and Todd, We are so sorry to hear the loss of Mr. Hicks, you and your family are in our thoughts and prayers.
Allen & Sharon Roberts & Family
September 27, 2021
My sincerest sympathy. Alvin was always so kind to me when I had the opportunity to see him. Fly high!
Susan Gentry
September 22, 2021
Showing 1 - 3 of 3 results