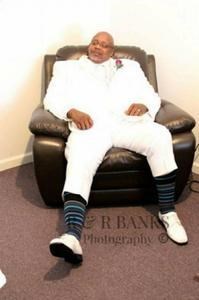 Barry Leo Douglas Sr., 60, of Palmyra, formerly of Nelson County, departed this life on Saturday, November 7, 2020 at his residence. Born April 11, 1960, he was a son of Winfield Douglas and Alice Fay Essex-Douglas.

In addition to his parents, he leaves to cherish his memories, his wife, Alice B. Douglas; two children, Latoya Henson (Gary) and Minister Barry Douglas Jr. (Shamika); Angela Perry, the mother of his children; three grandchildren, TaNya Henson, TaLasia Henson, and Gary Henson Jr., and his brother, Larry Douglas. He also leaves to mourn his stepchildren, Keshia Kelley, Ricky Kelley and Shannon Bowles; his stepgrandchildren, and a host of aunts, uncles, and other loving relatives and friends.

Barry confessed with his mouth and believed in his heart that he was saved and believed in his Lord and Savior Jesus Christ. He had spent his career in food service over the course of many years, either as Supervisor or simply known as, "Boss". Most recently, he was the Executive Chef at Branchlands Independent Living until retirement. He also owned his own catering business, Heavy Dees Catering Service. Barry always greeted you with a smile and he had such a warm welcoming spirit that would help anyone. He was known in school as being a "gentle giant", whom his classmates affectionately named, Hondo. He excelled in sports, and became a legend in basketball, and track and field, winning several championships and trophies. Barry loved his family and loved him some Dallas Cowboys-- as he would say, "#DC4L" (Dallas Cowboys for life). Barry also was a huge fan of wrestling, watching faithfully every Monday and Friday night.

A funeral service will be held at 2 p.m. on Saturday, November 21, 2020, at Byrum-Parr Funeral Home by Officiant Pastor Shawn Wright, and Eulogist Bishop George Gohanna with burial to follow in the Carter Family Cemetery. The family will receive friends one hour prior to the service at the funeral home. Out of respect for the family, we ask that you please wear a mask and practice social distancing, if attending the service

All Flowers can be Sent to Byrum-Parr Funeral Home and condolences and acts of kindness can be sent to 5156 Patrick Henry Highway, Nelson VA 22967. There will be no repast due to the COVID-19 19 Pandemic.

To plant trees in memory, please visit our Sympathy Store.
Published by Daily Progress on Nov. 15, 2020.
MEMORIAL EVENTS
Nov
21
Visitation
1:00p.m. - 2:00p.m.
Byrum-Parr Funeral Home, Inc.
7661 Patrick Henry Highway, Roseland, VA 22967
Nov
21
Funeral service
2:00p.m.
Byrum-Parr Funeral Home, Inc.
7661 Patrick Henry Highway, Roseland, VA 22967
Funeral services provided by:
Byrum-Parr Funeral Home, Inc.
GUEST BOOK
5 Entries
Barry was a great guy. I fondly remember playing basketball with him. He always had a kind word and a smile. RIP big fellow!
Rev. Chuck Morse
November 24, 2020
Douglas Family, Our deepest sympathies go out to you and your family during this difficult time. May you find the comfort and peace that you seek. Barry was always so kind, and always had a smile. He will be missed.
Janet (Jackson) Hansbrough
November 19, 2020
I worked with Barry at Branclands several years ago he was always so nice and made sure he put my spoon bread away for me I guess you can say I was spoiled.. My condolences to the family.
Tomaja Johnson
November 16, 2020
When I moved to Branchlands eleven years ago, I discovered an outstanding chef who took pride in his talent and really seemed to enjoy making us happy with his special treats . If his schedule allowed, he would be at the dining room door to greet us and we all loved any opportunity to chat with him. We have missed Barry so much since he retired, but since he has left this world so young, I am happy for him that he spent this past year and more at home with his family because we knew how much he loved them. As a chef and as a person, Barry was a star, and that star made the world a little brighter.
Mary Rodriguez
November 15, 2020
I will forever but thankful To have known Barry and I will always be thankful for time that I got to spend with my best friend
Jimmy Arbogast
November 15, 2020