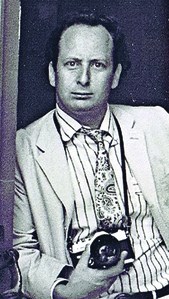 Barry Reyman Plotnick, better known by his professional name, Rey Barry, moved to Virginia for the University in 1955. He said he fell in love with Charlottesville as he crested Pantops Mountain, gazing down for the first time on the little hamlet he would call home for over 65 years. He died peacefully, surrounded by family, at Hospice of the Piedmont on June 8, 2021.

Rey brought his commitment to service, his dedication to his values, and his love of community to every aspect of his life. He attended the University of Virginia, was part of the group that created radio station WTJU, and was the station's first Chief Announcer. He was also a disc jockey and Music Director at local stations. After peculiar adventures in 17 countries, in the '60s Rey became a reporter and columnist for The Daily Progress covering UVA. An exciting time for the assignment, as these were the years of enormous changes in the college to both integrate and co-educate.

On Valentine's Day, 1970, Rey and Virginia "Gimmer" Leonard of Frankfort, KY married their true loves at the Rotunda. Rey and Gimmer's is the only wedding known to take place in this historic University building. He most recently lovingly supported Gimmer through the 15 year battle she lost to COPD on September 27, 2020.

In 1972, Rey and Virginia opened The New School with their friend Dorothea Hyman. Rey also spent 10 years as legislative and political aides. He was Media Director for numerous area politicians and served in the gubernatorial campaigns of Gov. Gerald Baliles and Lt. Gov. Henry Howell.

In 1982 under the sponsorship of the Chamber of Commerce, Rey founded S.A.F.E. - Stop Annexation ForEver to help establish the Charlottesville-Albemarle Revenue Sharing Agreement. This agreement has earned the city $326,308,341 to date.

During his lifetime of service, Rey was president of the Charlottesville-Albemarle Mental Health Association, a member of the Tandem School board for 10 years, co-founder of the Thomas Jefferson chapter of American Mensa, on the Virginia state board of the ACLU for over 10 years, on the Albemarle and Charlottesville Democratic committees for decades, a Warrant Officer in the Civil Air Patrol, and captain of his Chesapeake Bay bugeye ketch, Applejack.

At the time of his death he was a city council-appointed Board Member of the Albemarle Charlottesville Historical Society and Vice President of the Piedmont Chapter of the Antique Automobile Club of America.

In 1963, Rey founded his ebay business Records For Recollectors, which he ran for over 24 years. Prior to his retirement in 2000, Rey was Principal Broker of Rey Barry Associates, Realty. As the first Computer Committee Chairman of the local Board of Realtors, Rey compiled software to run a realty office before computers became commonly used. This grew into a book and an international Freeware Hall of Fame BBS distributing free computer programs worldwide.

A life-long writer, in 1997 he established www.Freewarehof.org where you can read about his confrontation with the Attorney General of the United States, friendship with a Russian spy, memories of The Gaslight restaurant where Bob Dylan played in his early days, and view Rey's interview with Hollywood legend Frank Capra. The Freeware Hall of Fame will continue under control of Rey's longtime friend Waldo Jaquith. It also includes the obituary he wrote himself: https://freewarehof.org/obituary.html

Survivors include many who will always be moved by their parents true love, including daughter, Brooke Barney Plotnick of Charlottesville who was Rey's caregiver throughout his final months with glioblastoma brain cancer and her daughter, Adele Koshy; daughter, Apple Jannotta of Lynnwood of Washington, her husband, Jeremy and beloved new grandson, Luca; treasured friend and supporter, Allison Campbell, who shared care with Brooke; brother, Paul Plotnick and his wife, Rhea, of Stamford, Conn.; and their children, Ellynne and Daniel; and close friend and ally, Bob Koshy of Richmond, Va.

Please visit with friends and share memories at the BBS Banquet monthly lunch, Rey's 'every second Friday at noon' tradition since 1982, held at the Cavalier Diner. All are welcome.

https://freewarehof.org/obituary.html
To plant trees in memory, please visit our Sympathy Store.
Published by Daily Progress on Jul. 11, 2021.
MEMORIAL EVENTS
No memorial events are currently scheduled.
To offer your sympathy during this difficult time, you can now have memorial trees planted in a National Forest in memory of your loved one.
MAKE A DONATION
MEMORIES & CONDOLENCES
5 Entries
I had the privilege of meeting Rey only a couple of times through our shared love of computers. I regret not having found a way to spend more time with this remarkable man.
Chris Hapgood
Friend
July 12, 2021
I always remember Rey as a kind and gentle soul and while we didn't see each other much in person we often talked by phone and shared our love of music. Especially when we were both at the Old WCHV in the 60's. Will miss you old friend.
Colin Rosse
Work
July 12, 2021
We offer our sincere condolences to Rey´s daughters, and their families! We are grateful for his diligent caretaking of my lifelong friend and his wife Gimmer! May he rest in peace from his suffering of late, a s be remembered for his many accomplishments across his long life!
B ( Barbara) and Jim Armstrong
Friend
July 12, 2021
Rey was a good soul, he stood up for his beliefs and was truly a multifaceted human being. I lost touch with him but always in his later years but always admired his intellect and integrity.
Ed Brownfield
Friend
July 11, 2021
May Gods promise found in John 6: 40, of the hope to see our loved ones again,comfort your heart and give you peace,strength and hope in the day ahead.
R W
July 8, 2021
Showing 1 - 5 of 5 results