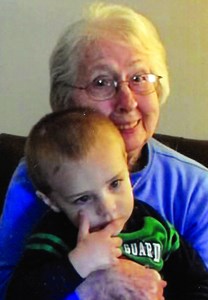 Our beloved mother, Caroline Little DeKay, left us peacefully on her journey to Heaven on May 6, 2021, where she knew she was awaited by the Lord and those of her family who preceded her. Mom lived by the belief that God is in charge of our lives and His love for us is infinite. Our time on earth is meant to be lived in service to others, and in this she was truly God's faithful servant, influencing the lives of family and friends alike by her caring example.

Born to Clifford C. and Alida B. Little on June 3, 1922, in Kingston, N.Y., Caroline grew up within an extended family including two uncles and their families, and her maternal grandparents, in addition to two brothers. Her father owned a grocery store which he was forced to close in the early years of the Great Depression. Her older brother Jim had to leave high school for a year and work to help keep the family afloat. Caroline's grandmother, to whom she was very close, helped keep the family together, tending an enormous garden, keeping chickens, and canning vegetables to feed them through the winter. As with so many of her generation, growing up during that difficult time helped shape Caroline's character.

After graduating from Kingston High School, Caroline went to work for The Olive Fire Insurance Company. She was very involved at First Reformed Protestant Dutch Church (known as Old Dutch), where she was the organist for many years and met the lad she would one day marry, Richard DeKay. Caroline claimed that she met Dick when he told her she hit the wrong notes during a hymn! Despite this inauspicious beginning, they were married in 1951 in Albuquerque, NM, where Dick was stationed in the United States Air Force. When he was posted to England, Caroline followed him (on the Queen Mary no less!) and they set up their first house together in Kidlington near Oxford. When they returned to the States, they brought with them a souvenir: a much-loved English Boxer puppy named Chico. Dick resumed his undergraduate education at Allegheny College before attending the University of Tennessee for graduate school. From Knoxville, TN, they made a final move with 3-year-old Susan, baby Sandra and, of course Chico, to Charlottesville, VA, where Dick would work for the Division of Mineral Resources from 1958 until retiring in the 1980s. Caroline liked to note that she had lived in Charlottesville over three times as long as she did in her own hometown!

Caroline was the quintessential 1960s mom: she prided herself on keeping her home in good order, picking kids up from school, providing delicious meals, helping with homework. She was a talented and avid seamstress and knitter, supplying many of her daughters' clothes. She loved music and was a fine pianist and organist, and many evenings were spent at the piano with the whole family joining in Broadway and movie music sing-alongs. Saturdays would often find Caroline sewing in the kitchen, listening to that week's Metropolitan Opera radio broadcast. In later years, she adored going to the Paramount Theater to see the Met: Live in HD simulcasts.

Although claiming to have "a black thumb," she loved flowers, especially peonies and zinnias, particular favorites of her grandmother. Possessed of a lively intelligence and curiosity, Caroline never stopped learning. She was an avid reader, a habit she happily passed on to her children. As she became less mobile, reading became her greatest pleasure, outside of visits from friends. She remained interested in current events, watching the news and reading the daily paper. She never missed voting in elections, including the 2020 Presidential Election. Growing up in New York, she was a Yankees fan, but became an ardent Washington Nationals fan once UVa's Ryan Zimmerman began playing for them. Zim, Max Scherzer, and Juan Soto were her favorite players.

Active for decades at Meadows Presbyterian Church in Charlottesville, she formed many friendships that lasted the rest of her life. She was a longtime member of a circle group (self-dubbed the Joy Group) and the church's prayer chain and continued to attend worship services and circle meetings into her mid-90s.

Caroline leaves to cherish her memory her daughters, Susan L. Porter and Sandra L. DeKay, both of Charlottesville; her granddaughter, Stephanie C. Mason; grandson-in-law, William C. Mason, and great-grandsons, Eli and Liam Mason, of Newport News, Va.; her brother, Richard Little of Saugerties, N.Y.; nieces, Jeri-Ann Calvin of Nolensville, Tenn., and Peggy Wolven of Poughkeepsie, N.Y., and their families; and nephews, Gregory Little of Saugerties, N.Y., and Douglas Little of White Plains, N.Y., and their families. She was preceded in death by her parents, her husband of forty-seven years, Richard DeKay; her brother, James Little; and her grandson, William Lawrence Porter.

The family would like to thank those who helped care for Caroline over the last several years, especially Shirley Turner (Home Instead Senior Care), whose friendship provided much joy and laughter. The family is also most grateful to Tabitha Jones and Jade Adamson (Comfort Home Health Care Services LLC), and the nurses and CNAs from Encompass Health and Hospice of the Piedmont, who did everything possible to keep Caroline comfortable for the last five months of her life.

A celebration of Caroline's life will be held indoors at Meadows Presbyterian Church, 2200 Angus Road, Charlottesville, on Sunday, June 13, 2021, at 2 p.m. Social distancing will be practiced. Masks are not required for those who are fully vaccinated.

Those wishing to make a contribution in Caroline's memory may do so by giving to Meadows Presbyterian Church, the local Salvation Army, or a charity of your choice. As Caroline used to say, "Remember: God loves you best!"

Thank you for everything, Mom. We will never stop loving you or missing you. Rest in peace.
To plant trees in memory, please visit our Sympathy Store.
Published by Daily Progress on Jun. 9, 2021.
MEMORIAL EVENTS
Jun
13
Celebration of Life
2:00p.m.
Meadows Presbyterian Church
2200 Angus Road, Charlottesville, Virginia
MAKE A DONATION
Please consider a donation as requested by the family.
MEMORIES & CONDOLENCES
6 Entries
Susan and Stephanie So sad to hear of your mother´s passing. She appears to have had an amazing journey in this life. It´s so difficult to loose a loved one. My prayers and love are with you as you walk through the grief of loss. Lori Richards
Lori Richards
June 11, 2021
Sandy, Sorry to hear of your mother´s passing. I remember her well from your bringing her to performances at the Paramount.
Larry Hope
Work
June 10, 2021
With heartfelt love from far away, we shall keep Sandy and her family in our thoughts and prayers. We have such delightful memories of Mrs. DeKay; she watched the boys grow up and graciously allowed them to play on the piano for her on our visits as we came back and forth through Charlottesville. She radiated love ~ we are blessed to have known her.
The Rempe Family
Friend
June 10, 2021
Sandy was my best friend in grade school. It was always fun to visit the DeKay family because Sandy, Susan and Mr. and Mrs. DeKay always made me feel like part of the family and at the same time an honored guest. If ever there was such a thing as a Great American Family, it was the DeKays. Years later, at my Mom´s memorial, Sandy and I reconnected and we´ve stayed close ever since. I cherish her friendship. I´ll always remember Mrs. Dekay´s laugh, her kindness and her generous loving spirit. It has been a privilege to know her. Deepest condolences to Sandy, Susan and loved ones. She was well loved and cared for by Sandy and family and she will be watching over them until they meet again.
Jan Chaffin
Friend
June 10, 2021
"With deepest sympathy as you remember Mrs. Dekay" I Am keeping your family in my thoughts and prayers." May She R.I.P. Love, Alice Hill ( Downtown Dental)
Alice Hill
June 9, 2021
What a beautiful life story!
Steve Layman
June 9, 2021