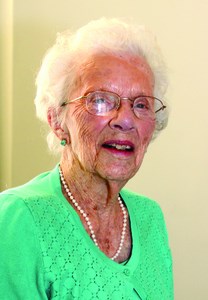 Caroline Amalia Pfohl Carter of Charlottesville, Va., died on November 3, 2020, after a blessed and giving life of 103 years.

She was born in Salem, N.C. on October 15, 1917, to William Siewers and Ruby Jenkins Pfohl. She attended the public schools in Winston-Salem and graduated from Salem College in 1939. She taught school for one year in Yadkinville, N.C.

On June 22, 1940, at Home Moravian Church she married Walter H. Carter of Front Royal, Va., and then spent her entire adult life in that Shenandoah Valley city. She was active in the Front Royal United Methodist Church and was a charter member of the Warren Memorial Hospital Auxiliary. She volunteered for numerous organizations, including C Cap.

She was preceded in death in 2003 by her husband of 63 years, Walter Carter.

Known in the family as "GG Mom," she made everyone feel loved and special. The family knew that she was indeed the special one.

Especially important and guiding for her was her faith. She lived by the Apostles Creed. Her favorite passage from the Bible was John 3, verses 16 and 17, which she left instructions to include in her obituary: "For God so loved the world that He gave His one and only Son, that whoever believes in Him shall not perish but have eternal life. For God did not send His Son into the world to condemn the world, but to save the world through Him."

Funeral and graveside services for immediate family were held on November 14, 2020, in Front Royal, Va. The family requests that memorial gifts be made to Front Royal United Methodist Church, 1 W. Main St., Front Royal, VA 22630, or to The Employee Christmas Fund, Martha Jefferson House, 1600 Gordon Ave., Charlottesville, VA 22903.
To plant trees in memory, please visit our Sympathy Store.
Published by Daily Progress on Nov. 22, 2020.
MEMORIAL EVENTS
No memorial events are currently scheduled.
To offer your sympathy during this difficult time, you can now have memorial trees planted in a National Forest in memory of your loved one.
Funeral services provided by:
Maddox Funeral Home
GUEST BOOK
0 Entries
Be the first to post a memory or condolences.