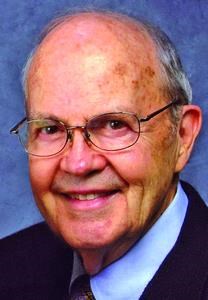 Charles Holden Smith Jr., beloved husband, father, grandpere, and great-grandpere died peacefully on Thursday, April 8, 2021, at age 94, of natural causes. Born on December 23, 1926, in Charlottesville, he was the only child of Mabel Johnson and Charles Holden Smith.

Charlie's life was devoted to his family, his community and his love of learning. He grew up with strong ties to the University of Virginia where his father, a UVA student, housed many UVA sports athletes who often babysat for young Charlie. In 1937, the family moved to Richmond, Va where Charlie graduated from Thomas Jefferson High School in 1943. He then entered the University of Virginia and followed his father joining the Sigma Nu fraternity.

A World War II veteran, Charlie was drafted in 1944 and commissioned 2nd Lt. from OCS Infantry division at Ft. Benning, Ga. He served as curriculum chief and instructor at SHAEF Information and Education Staff School in Frankfurt, Germany.

After his discharge in 1947, Charlie returned to Richmond where his father introduced him to Emily Reese whom he married in 1948. They enjoyed life together for 63 years until her death in 2011. He graduated from UVA in 1950 with a major in History, minors in Religion and Political Science, while also working as an Announcer at WCHV. After graduation, he became local Sales Manager of WCHV and continued as an Announcer for 13 years. He was active in the Junior Chamber of Commerce and organized their first city-wide blood drive with the Red Cross.

In 1963, Charlie joined Montague, Miller & Company, Inc. Realtors as a sales associate, later to become a partner and managing broker. In 1977 he was named President of the company until his retirement in 1986. Under his management the company extensively grew their sales force and expanded into property management. In 1976, he installed the first computer system used in Charlottesville area real estate, writing the area's first MLS computer program. In 1970, he was President of the Charlottesville Area Association of Realtors, for which he was chosen "Outstanding Regional Board President" in 1971. He received the 1979 award for "Realtor Best Exemplifying the Code of Ethics," and was inducted into the CAAR Hall of Fame in 2007 for his lifetime contributions to real estate. In 1979, Charlie was also President of the Charlottesville-Albemarle Chamber of Commerce.

Charlie had a strong love of learning. His never-ending curiosity led to reading the Great Books, writing, learning foreign languages, and appreciating music from classical to country, opera to jazz. His interests included investments, genealogy, photography, beekeeping, auto-mechanics, camping, fishing, painting, harmonica playing, and square dancing. He was President of the Charlottesville-Albemarle Beekeepers Association as well as President of the Virginia Reelers and Chairman of the Virginia Square Dance Festival.

A great storyteller with a wonderful ability to tell a good joke or pun, Charlie loved to play with words. His many rhyming, humorous poems for birthdays and anniversaries are keepsakes today.

In 1963, Charlie became the UVA Public Address Announcer for men's football games at Scott Stadium and, as of 1965, for men's basketball at University Hall. Charlie's announcement "There will be no smoking in UHall except by the red-hot Cavaliers" was welcomed with loud applause. He would work over 700 Cavalier games during 34 years until his retirement as announcer in 1997.

Charlie and Emily loved to travel beginning with their family tent camping at Cape Hatteras, NC followed later by RV adventures that included visiting all 50 states and the Canadian Provinces as well as traveling to over 20 countries.

The Miller Center at UVA became Charlie and Emily's passion. Charlie loved greeting Forum attendees and was known for his knowledgeable questions for the speakers. In 2008, he received The Miller Center's Elizabeth Scott Exemplary Leadership Award. They were members of the Miller Center Presidential Cabinet, the Monticello Presidential Cabinet, founding members and past President of The Greencroft Club, and members of The Colonnade Club. They were supporters of the arts including the Charlottesville Symphony and the Virginia Museum of Fine Arts. Charlie was past President of The Beacon Club and a board member of Senior Statesman of Virginia. A life time supporter of his alma mater, he was past President of the Thomas Jefferson Society of UVA Alumni and member of the UVA Lawn Society.

A graveside service will be held at Monticello Memory Gardens on Saturday, May 1, 2021, at 2 p.m. Covid protocols will be followed.

In lieu of flowers, the family suggests memorial contributions be made to Martha Jefferson House, 1600 Gordon Avenue, Charlottesville, VA 22903.