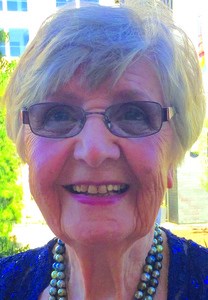 During her long and remarkable life, Betty had three loves – her family, her work and her adventures.

Born in Sheffield England in 1927, she married Jack Thorogood and had a son, Roger. Following World War II, her life took a turn when she met and eventually married Harris Ketron, an American stationed at an air base in Norfolk England. They were soon transferred to Idaho, the first of many adventures in the life of the British bride. They lived in Idaho long enough to have a daughter, Susan, then returned to Europe where they traveled around the continent in a VW camper. When Harris retired from the military in 1965, they moved to Southern California and remained there until 1995 when they moved to Charlottesville, Virginia, to be near Susan and her family.

To her children and grandchildren, she was as unrelenting in her love as she was in her lessons about life, lessons that often returned to the virtue of frugality. "Mind the pence and the pounds will take care of themselves," she'd counsel. She was fiercely protective of her loved ones, and took every opportunity to bolster their confidence, a gift she learned from her husband, whom, she always said, made her finally believe that she was lovable.

Professionally, Betty was a polite force of nature. Charming and disarming, she had a way of motivating others to believe that they were capable of accomplishing more than they imagined. To be sure, she had a profound impact on the organizations she helped to lead and grow – Pacific Oaks College, The Frostig Center, The Assistance League of Southern California and Casa Pacifica in California. But asked what was most rewarding, which moments she truly treasured, she wouldn't talk about turning around a nonprofit (she did that), building a dynamic Board (several times) or funding a new building. She'd talk about teaching and coaching. And mostly, she'd talk about the people, younger than she, who worked alongside her.

When retirement rolled around the first, second and third time, Betty celebrated each event with the purchase of a motorhome – the first, an aircraft carrier of an RV that she enjoyed with her husband, the second, one that she fetched from the West Coast without telling her family, and the third, a compact little gem that she drove until she was 88. She was passionate about her pastime, which began as a way for her to enjoy a perfect cup of tea and her Jack Russell Terrier wherever she traveled.

When she wasn't on the go, she loved her work as a volunteer, first as a capital campaign consultant for the Paramount Theater and second as a Board member for the Virginia Institute of Autism. After her husband's death, she found laughter and friendship as a member of the Free Union Dames (FUDS).

Betty was predeceased by her mother and father, Dorothy Brierley Laidlow Thorogood and Norman Laidlow; her brother, Gordon Laidlow; and her husband of 44 years, Harris Lloyd Ketron. She is survived by her son, Roger Thorogood and wife, Lorna McElhone; daughter, Susan Ketron, husband, Michael McKee; and grandchildren, Morgan McKee and Amelia McKee.

Betty will be interred with her beloved husband at Arlington National Cemetery. A private celebration of life will be held at a later date. The family would like to thank Hospice of the Piedmont and especially Nina Siegrist for her support during the final adventure of Betty's life and the staff at Trove Home Care, who enabled her to remain in her beautiful home, surrounded by family.

In lieu of flowers, the family requests donations be made to the Betty Ketron Fund at the Center for Nonprofit Excellence www.thecne.org, the Virginia Institute of Autism, www.viaschool.org, the Paramount Theatre, www.theparamount.net or to an organization of your choosing.

Condolences may be shared with the family at hillandwood.com.

Published by Daily Progress from Nov. 7 to Nov. 9, 2021.
To plant trees in memory, please visit the Sympathy Store.
MEMORIAL EVENTS
To offer your sympathy during this difficult time, you can now have memorial trees planted in a National Forest in memory of your loved one.
Funeral services provided by:
Hill & Wood - Charlottesville
MAKE A DONATION
MEMORIES & CONDOLENCES
Sponsored by Hill & Wood - Charlottesville.
2 Entries
Forever in my thoughts-a remarkable lady
J C Laidlow
November 19, 2021
Mary Betty literally saved the Virginia Institute of Autism. We had to let our executive director go and we were scrambling to figure what to do while we looked for someone new. Betty was on our Board at the time and quietly volunteered to "help out". Her financial and organizational expertise kept us alive for several months. I was working part time in the office and seeing her calm and smiling face every day was such a blessing. She was quick, funny, and sharp as a tack. Everyone loved and admired her. I certainly did. I will never forget all she did for VIA and for me. She made the world a better place.
Ali Webb
Friend
November 8, 2021
Showing 1 - 2 of 2 results