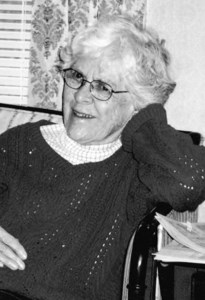 Nancy Pringle Davenport, known as "Pring" to friends and family, was the daughter of Elizabeth Stewart "E" Hanna and William McAfee Hanna, of Baltimore, Md. She grew up in Schenectady, N.Y., and in Baltimore, with two brothers, John Hunter Hanna "Jack", and William McAfee Hanna Jr. "Bill". After high school at Girl's Latin School of Baltimore, she attended Roanoke College, studying accounting. Here she met the love of her life and husband of 62 years, Arthur Bruce Davenport. She is survived by her daughters, Nan Davenport of Oakland, Calif., Kit Davenport (David Jordan) of Arcata, Calif., and Ali Wieboldt (Tom) of Newport, Va.; her granddaughter, Elsa Fast (Carl) of Shizuoka, Japan; her cousin, Dr. John_Davis; sisters-in-law, Kitty Davenport and Joanne Hanna; and life-long best friend, Boo Dulaney.

Pring and Bruce settled near Ivy, outside of Charlottesville, Va., where they raised the three girls (and a number of dogs and cats), renovated an old farmhouse, cultivated flowers and a big vegetable garden, and played chamber music on recorders with friends. They were patrons for decades of Charlottesville's "Tuesday Evening Concert" series at Cabell Hall.

Love of the natural world, and particularly of birds, led to many years banding birds for Fish and Wildlife Service research. Pring was also known as the host of quite a few lively post-count dinners for a local "circle" of the Audubon Society's Christmas Bird Count.

Pring loved reading (especially serial mystery novels!) She was a valued and honored long-time volunteer for Recording for the Blind and Dyslexic (Learning Ally) of Charlottesville.

With her head for numbers, Pring worked part-time as a bookkeeper for several Charlottesville businesses, and was the real boss of family finances.

After Bruce's retirement from Sperry, Pring & Bruce ventured out on yearly trips to explore far-flung natural places and cultures, ranging from south Texas to the Olympic Peninsula, from Costa Rica to the Peruvian Amazon to rural France.

In 2006, Pring and Bruce moved to The Colonnades in Charlottesville. Pring steadfastly supported Bruce as he struggled with Alzheimers and other ailments for several years, before his death in 2013. When Pring was also dealing with dementia, she moved to the Kroontje Healthcare Center at Warm Hearth in Blacksburg to be closer to her daughter, Ali, in 2017.

Pring's nature was unassuming and kind, practical and down-to-earth. Some things she loved were cats, petunias, vegetables straight in from the garden, bird-walks with Bruce, telling stories, and family.

Our family extends grateful appreciation to the compassionate care-givers in The Arbor at Kroontje, whose attentive care made Pring's last years easier.

No memorial service is planned at this time.

Donations in Pring's memory might be made to The Nature Conservancy Virginia.
To plant trees in memory, please visit our Sympathy Store.
Published by Daily Progress on Jun. 7, 2021.
MEMORIAL EVENTS
No memorial events are currently scheduled.
To offer your sympathy during this difficult time, you can now have memorial trees planted in a National Forest in memory of your loved one.
MAKE A DONATION
MEMORIES & CONDOLENCES
1 Entry
Girls--I don't think we ever met you but we bought Woodstock Hall in early 1996. Your parents were such lovely people. I'm so sorry for your loss.
The Pettygroves
June 7, 2021
Showing 1 - 1 of 1 results