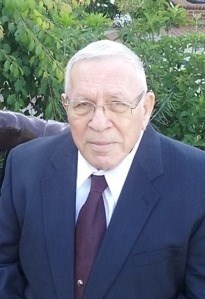 In addition to his parents, he was preceded in death by his sisters, Grace Davis Wagner (Gilbert), Pauline Davis Cooke (Leroy), and Myrl Davis Barfield.

An online guestbook and tribute wall are available at www.foundandsons.com

Found and Sons Funeral Chapel of Culpeper is serving the family.

Published by Daily Progress on Sep. 15, 2021.
To plant trees in memory, please visit the Sympathy Store.
MEMORIAL EVENTS
To offer your sympathy during this difficult time, you can now have memorial trees planted in a National Forest in memory of your loved one.
Funeral services provided by:
Found & Sons Funeral Chapel
MAKE A DONATION
MEMORIES & CONDOLENCES
Sponsored by Found & Sons Funeral Chapel.
4 Entries
May God bless you and your family in this time of sorrow. We did not know of his passing until this evening, Thursday. Please know that you are in our thoughts and prayers. Take care.
Jim and Diana Salmon
Other
September 16, 2021
Thoughts and prayer-Have know Rev.Davis for years-God Bless LaVerne & Gary Shifflett and Geneva Marshall
LaVerne Shifflett
Friend
September 16, 2021
Rev Davis. You married my husband Sam and me in Oct 1985. Nov 1986 you gave the service at his funeral. I have never forgotten you. God bless you and your family. You really were a big part of my life. RIP sir
Sharon Ormsby
September 15, 2021
Heather Davis Carila, sending condolences to you and your family. You have such a big heart and I know that half of it is filled with love and memories of your father. God bless.
Daphne Lascano
September 15, 2021
Showing 1 - 4 of 4 results