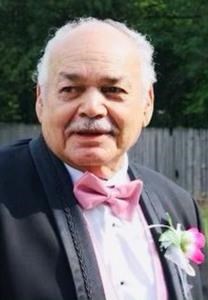 William Franklin Coles Sr., 84, was born in Charlottesville, Virginia on January 21, 1936, to J. Golden and Martha Brookins Coles. He departed this life for his next adventure on Monday, November 16, 2020, surrounded by his family.

His education included graduating from Jackson P. Burley High School Class of 1954 and attending Virginia State University (formerly Virginia State College). William began his 37 year career at the United States Postal Service in 1958 and retired in 1995. He was the proud owner/operator of Metro Maintenance in the 1970s. He also retired from The Boar's Head Inn after 20 years of service. Lastly, he was a professional driver for Blue Ridge Executive Transportation for eight years, a post-retirement career he thoroughly enjoyed.

William was a dedicated husband for 62 years, marrying Sylvia Page Harris, whom he affectionately called "his bride" on June 7, 1958. Working hard and providing for his family was the fuel that drove him. William instilled a sense of goodness, kindness, and independence into his children, grandchildren, and great-grandchildren and was loved by so many nieces and nephews, representing his wife's family from Massachusetts nicknamed "The Boston Crew", New Jersey, Maryland, and Virginia.

William, affectionately known as "Tank", "Daddy Coles", "Pop", "Willie", "Bill" and "Coles", was a steadfast friend and role model to many. After being diagnosed with dementia in 2013, he spent the last years of his life being lovingly cared for by his wife, Sylvia, his daughter, Kelly and her husband, Tony making sure his final two years were some of his best years ever.

He leaves a host of nieces and nephews, cousins, and lifelong circles of friendships. William shared a particularly fond relationship with nephews, Alfred "Buzzy" Page, Earl Jones, Paul Harris, Sr. (Carol), and a daughter-like niece, Dr. Sherry Young-Jones; as well as his cousins from the Weaver-Stetson-Golden families.

The family would like to acknowledge the love and support of Mr. and Mrs. Lawson and Lillie Calloway, Mr. and Mrs. Willie "Sonny" and Dorothy "Dot" Williams, Mrs. Ramonde Gardner, and our Pocket Lane Esmont family among the many more who brought so much joy to his life over the years.

In lieu of a public service, a walk-through viewing will be held from 11 a.m. until 6 p.m. on Saturday, November 21, 2020, at the J. F. Bell Funeral Home Chapel. Due to the COVID19 pandemic, masks and social distancing is expected.

Donations to the Albemarle Charlottesville Fire & Rescue Station 11 and The Hospice of the Piedmont (www.hopva.org) would be appreciated, as they were tremendously helpful to our family in our times of need.

J. F. Bell Funeral Home is in charge of arrangements. Condolences may be sent to the family via the guestbook at www.jfbellfuneralservices.com.

To plant trees in memory, please visit our Sympathy Store.
Published by Daily Progress on Nov. 19, 2020.
MEMORIAL EVENTS
Nov
21
Viewing
11:00a.m. - 6:00p.m.
J F Bell Funeral Home Inc
108 6Th St Nw, Charlottesville, VA 22903
Funeral services provided by:
J F Bell Funeral Home Inc
GUEST BOOK
10 Entries
So sorry for your loss. I just saw this very sad news! I love pops and know he's in wonderful hands now. If anyone would like to call me, I am in Acton, VA 434 484 2292
Verna Lambert
November 25, 2020
Sending thoughts and prayers to your family. You have our full support here at DeKalb County Sheriff Office.
Angela Poole
November 23, 2020
Our deepest sympathy to our long distance family. I am truly happy to have been able to get to know you through your dad & my dad´s relationship. My dad had such great stories about them growing up together and I always looked forward to talking to you all when he called. Let´s keep that tradition going. Our love strength and blessings are being sent to you all. Much Love, Kim & Kent
Cousin Kim & Kent Davis from California
November 21, 2020
Words fail to express my sorrow for your loss. Please know I am sending prayers of comfort and peace.
Jacqueline Braxton
November 20, 2020
Sylvia so sorry for your loss. Your husband was a very handsome and kind man. Always enjoyed seeing him at the NGIC Military Balls as you so efficiently taking photos. The best to you. Lou
Lou Fitzgerald
November 19, 2020
SENDING OUR HEARTFELT LOVE AND SYMPATHY TO SYLVIA AND ALL OF THE FAMILY..SO SORRY TO HEAR OF WILLIAM'S PASSING.....HE IS ONE OF GOD'S ANGELS....IN NO PAIN AND SMILING.....R.I.P....AND LOVE TO ALL THE FAMILY.....STAY STRONG FAMILY AND REMEMBER ALL THE GOOD TIMES YOU ALL SHARED.....WITH LOVE LESSIE AND LUTHER SIMS AND FAMILY...
Lessie and Luther Sims
November 19, 2020
May the memories that you have bring you smiles and laughter. He will be greatly missed. Love, The DeBose & Franklin Family
Ashaki DeBose Franklin & Family
November 19, 2020
My sincere condolences to the Coles family.
Jonathan Spivey
November 19, 2020
With Deepest Sympathy.From The Goggins and William's Family.
Georgia Little
November 19, 2020
With deep sympathy. I send prayers of strength for the family. God rest his soul.
Anita Smith
November 19, 2020