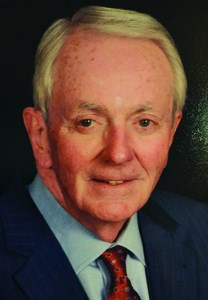 Bill was born in Brooklyn, N.Y., to John "Jack" Hutton and Julia Phelan Hutton on April 17, 1937. He was their only child and the apple of his mother's eye. Bill attended Power Memorial High School in New York City, N.Y. He married the love of his life, Elaine Ellis Hutton on April 28, 1962, in Brooklyn, N.Y. Bill graduated from Iona College in New Rochelle with a Bachelors in Accounting. He worked as an accountant/controller for several companies in N.Y./N.J., with a career span of 40+ years and eventually retired from North Jersey Truck Center in 2003. When he decided he had enough of the cold and moved a little more south to settle in Virginia for the last 17 years. He was in the National Army Reserve and a proud member of the Knights of Columbus for 65 years.

He traditionally was called Bill, yet he acquired many special names Billy, Willy, Chief, Big Guy, Mr. Hutts just to name a few. He was a loyal son, loving husband, trustworthy friend, amazing father, a very proud Pop Pop. He was an all-around one of a kind true blue gentleman. The most important thing for him was providing for and spending time with his family.

Bill enjoyed playing CYO basketball, bowling and golfing. He loved watching any western, especially John Wayne, Criminal Minds, Law & Order, or about any crime & drama show. He enjoyed country music and big bands and could dance like Fred Astaire. Bill was inquisitive, engaged and never forgot one detail. He knew a ton about current affairs and any/all sports at all levels, professional, collegiate or any event affiliated through his kids/grandkids. He was quick to suggest a meal out together or ordering in especially if it was easier and German food, Hibachi, Italian, Chinese or Pizza were a few of his favorites. Bill was notorious for "picking up the check" (which led to arguments as we got older) and his insatiable sweet tooth…candy, ice cream, even cookies that taste like "straw". He cherished spending time with his wife and family and all extended family and friends.

There are so many amazing memories and wonderful times together. His door was always open and he was such a big part of our lives that he inevitably branched out and touched so many others, his memory will live on forever.

Bill was preceded in death by his parents and is survived by his wife of 58 years, Elaine; daughter, Patti and son-in -law, John Glassford; son, Bill and daughter, Cathy and son -in-law, Russell Stewart; and three grandchildren, Ryan, Jack and Julia.

The family of Bill Hutton wishes to extend our sincere thanks to all family and friends, the nurses and doctors of Martha Jefferson Hospital and the volunteers at Lake Monticello Fire and Rescue.

In lieu of flowers, the family is requesting you consider donations to the Lake Monticello Fire & Rescue, 10 Slice Rd., Palmyra, VA 22963

Arrangements have been entrusted to Thacker Brothers Palmyra Funeral Home.

Relatives and friends may share condolences and memories online with the family by visiting www.thackerbrothers.com.

To plant trees in memory, please visit our Sympathy Store.
Published by Daily Progress on Jan. 3, 2021.
MEMORIAL EVENTS
Jan
15
Memorial Mass
11:00a.m.
Saints Peter and Paul Catholic Church
4309 Thomas Jefferson Parkway, Palmyra, Virginia 22963
Funeral services provided by:
Thacker Brothers Lake Monticello Funeral Home
GUEST BOOK
2 Entries
Condolences to the great Hutton Family in the loss of "Mr. Hutton." I have only the greatest memories of growing up on Canterbury Drive in Ramsey, and the Hutton´s were always at the center of all the action! God Bless to all, and may he Rest In Peace having lived a full life.
Mike and Laura Hughes
January 10, 2021
Elaine and family, My sincere condolences on your loss of Bill. He was a great guy. May he rest in peace.
Dick van Nierop
January 4, 2021