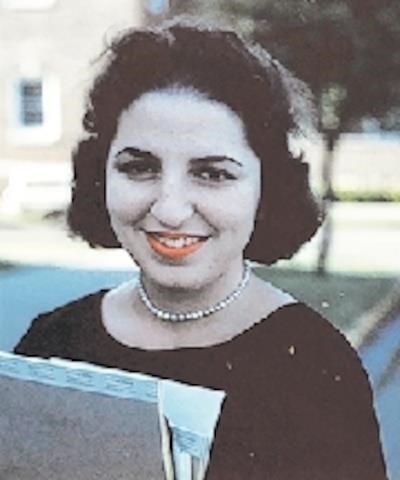 FUNERAL HOME
Moore Funeral Home
1219 North Davis Drive
Arlington, TX
LACKMAN, Annette Annette Rae Robinson Lackman, a native Dallasite, died on November 19, 2021, at the age of 83, after enduring the challenges of Parkinson's Disease for more than twenty years. She was a brilliant student: at 16 years old, she was valedictorian of the Hillcrest High School class of 1954, where her classmates voted her "Most Dependable." She earned a journalism degree from Southern Methodist University and a master's from Harvard Radcliffe before returning to Dallas to work as the assistant director of the Southwestern School of Banking at SMU. Her breadth of knowledge and recall was astounding, and in a dispute over details, she was invariably correct. She loved the New York Times Sunday crossword puzzle, which she would complete in ink. Annette passed the Foreign Service exam and was offered a post in Istanbul, but turned down an international diplomacy career to accept a marriage proposal from Howard Lackman, may his memory be a blessing, to whom she was married for more than fifty years. She had the patience of a saint, a keen and curious mind, and a savvy business acumen. Way before it became a mantra, "keep calm and carry on" described her perfectly. While raising two children, she became a pioneering businesswoman. Navigating the emerging real estate market in Arlington, she formed her own residential real estate brokerage firm, managed one of the largest area Century 21 agencies, mentored countless younger women realtors, and independently brokered many complex commercial transactions throughout the mid-cities. She could recite the history of most of the commercial properties in Arlington. During the real estate crash in the late 1980s, she reinvented her business, commuting back and forth to Florida to represent property owners protesting tax appraisals. She played the piano and enjoyed travel, theater, museums, and music, especially Tony Bennett. She was surprisingly good at blackjack and she enjoyed a Scotch and soda, though she was known to knock back a tequila shot on special occasions. She was a great cook and kitchen manager, and an advocate of healthy eating long before that was fashionable. She read Hebrew and was learned in Jewish traditions, but she welcomed people of all faiths and backgrounds to her home and listened carefully to their stories when they came. Annette was the oldest of three children born to Morris and Sophia Robinson, immigrants from Eastern Europe. She grew up surrounded by extended family in what is now a designated historic district known as the South Boulevard-Park Row Historic District in South Dallas. Long before Ancestry.com, Annette spent years doing original research into her family's history. She traced her roots to a village outside of present-day Belarus, where her great-grandparents lived in the late 1800s, and she documented her parents' journeys from Europe through Ellis Island and Galveston. Annette is survived by her daughter Samara Lackman Kline and son-in-law Andy McCarthy; her son Jared Lackman and daughter-in-law Leslie Lackman; grandson Ryan Kline and his wife Madeleine Kline; grandchildren Sadye Jane Lackman and Shane Jacob Lackman; brother Jay Robinson and sister-in-law Laurie Robinson; and sister-in-law Elaine Smith. The Lackman Family has the greatest appreciation and admiration for Team Annette: Betty, Zibah, Jeje and Connie, who added years to Annette's life and life to her years. They were not only her long-time caregivers, but also her friends. Contributions in memory of Annette's life are welcome at Congregation Beth Shalom in Arlington, the synagogue she helped to found and attended frequently; organizations supporting those wrestling with Parkinson's Disease; or the charitable cause of your choosing.


Published by Dallas Morning News on Nov. 22, 2021.
To plant trees in memory, please visit the Sympathy Store.
MEMORIAL EVENTS
To offer your sympathy during this difficult time, you can now have memorial trees planted in a National Forest in memory of your loved one.
Funeral services provided by:
Moore Funeral Home
MAKE A DONATION
MEMORIES & CONDOLENCES
Sponsored by The Dallas Morning News.
8 Entries
I knew her when I visited her home on 118 Varsity CIrcle in the 1970s to 1980s and sell Christmas cards. I sure missed her. Hello to her daughter who knew me.
Brantley Harold Hinshaw, Jr.
Friend
November 25, 2021
we are so sorry for your loss just wish there was something that we could say or do to make things easier for you
barbara and larry bushner
Friend
November 25, 2021
Samara, I am sorry for you loss. You and your family are in our prayers.
Ken Tomlinson
Friend
November 22, 2021
I did not know Annette but her son, Jed. I am so impressed by how accomplished and giving she was during her life. I know what an amazing woman she was by knowing her son, who she obviously raised into a wonderful human. My deepest sympathies to her family and friends.
Paige Lewis
November 22, 2021
Such a beautiful and thoughtful Memorial! Much love to you all! As one of my longest and dearest friends, I definitely see MANY qualities that Jed has carried on to continue to pay homage to his precious Mother.
Chip Joslin
November 22, 2021
Annette and Howard were a wonderful and positive driving force to the Arlington Jewish community. They are missed.
Richard Atkinson
November 22, 2021
My condolences to Jed, Samara, and the entire Lackman family. Mrs. Lackman was an amazing, and amazingly kind, person I was privileged to know.
Matthew Eastus
Friend
November 21, 2021
I will alway remember the happy moments we spent with the Robinson/Shwiff family at family cousins meetings & all the many simcha's.
Rita Marshal
Family
November 20, 2021
Showing 1 - 8 of 8 results