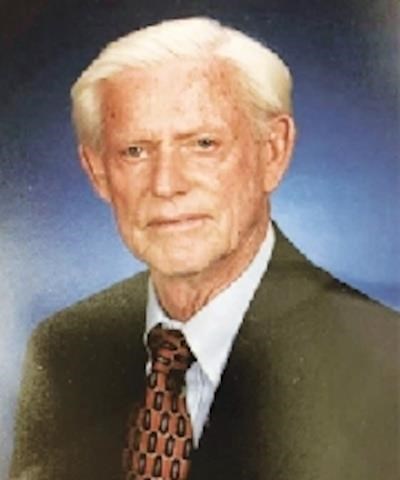 BORN
1928
DIED
2021
FUNERAL HOME
Restland Funeral Home and Memorial Park
13005 Greenville Ave
Dallas, TX
HARDIN, George William George William Hardin went home to his Lord, Oct. 7, 2021, after a lengthy illness. George was born May 19, 1928 to Glenn and Claribel Hardin in Nevada, MO. After graduating from Nevada HS, George enlisted in the Navy and trained as a Medic Corpsman. After his two-year stint in the Navy, he attended the University of Missouri, and then secured a job with Cook Paint. In 1953, George transferred to Dallas as the Industrial Sales Manager over several states. George and his first wife Donna joined Lakeside Baptist Church in 1953, where he was a Deacon and a Sunday School teacher. In addition, he served on various committees, never missed a mission trip in over 50 years, and mentored many young men and led them to Christ. George loved being active; he was an avid skier and golfer. While he was working out at the Dallas Athletic Club, he met his second wife, Cathy. During their 22 years of marriage, George and Cathy traveled extensively, both in the United States and abroad. One of George's favorite memories was skiing the Italian Alps and driving the autobahn. George is preceded in death by his first wife, Donna May Perky Hardin, parents, sister Sue Wilson, brother Joe Hardin, and stepson Richard J. Catalano. He is survived by his wife Cathy; four sons: David (Cynthia), Daniel (Carolyn), Randy (Cindy), Steve (Julie); Stepdaughters: Angela Vrana and Kathryn Drown; 12 grandchildren and 21 great-grandchildren.

Published by Dallas Morning News on Oct. 13, 2021.
To plant trees in memory, please visit the Sympathy Store.
MEMORIAL EVENTS
To offer your sympathy during this difficult time, you can now have memorial trees planted in a National Forest in memory of your loved one.
Funeral services provided by:
Restland Funeral Home and Memorial Park
MAKE A DONATION
MEMORIES & CONDOLENCES
Sponsored by The Dallas Morning News.
1 Entry
Our deepest sympathy, and we will miss George and his Forever smile!
Janice L Nash and Lancelot G Metcalf
Friend
October 13, 2021
Showing 1 - 1 of 1 results